The mid-life upgrade (MLU) of the CV9035NL infantry fighting vehicle (IFV) is focusing mainly on the turret, according to the Royal Netherlands Army (RNLA) and BAE Systems. The company announced the signing of the contract with the Dutch Defence Materiel Organisation (DMO) on 14 January with a press release headlined, ‘BAE Systems receives USD500 million contract to provide new turret for Netherlands’ CV90s’. 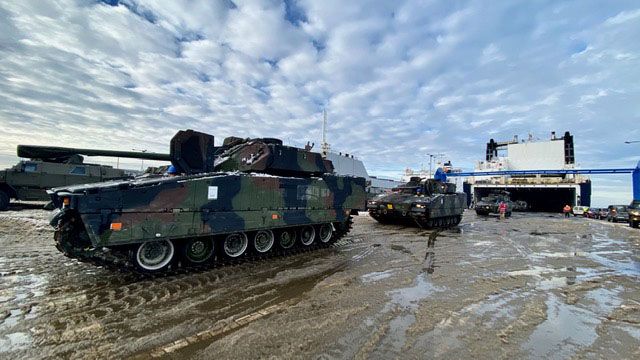 The RNLA CV9035NLs that returned home from Lithuania at the end of January will be among the 122 IFVs that will receive an MLU. (Dutch MoD)

The MLU includes the installation of a Spike anti-tank guided missile launcher and the Iron Fist active protection system (APS). BAE Systems told Janes on 26 January that the current 35 mm turret is already among the most advanced and lethal turrets currently in operation but that a risk reduction study recommended that its layout be redesigned to maximise the performance of the integrated systems. Warrant Officer (WO) Tarkan, CV9035NL MLU end user representative and production manager, told Janes on 21 January this involved moving the 35 mm gun main armament forward, which “hugely improves ergonomics”, with the crew sitting next to each other rather than being separated by the gun. He added that the resulting extra room in the turret means the vehicle can carry more directly available rounds to the main gun, as well as providing greater flexibility in the mix of armoured piercing and airburst munitions the vehicle can carry.

The mid-life upgrade (MLU) of the CV9035NL infantry fighting vehicle (IFV) is focusing mainly on the...