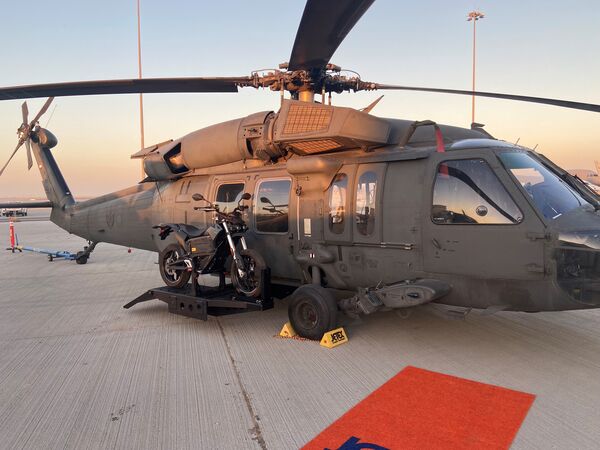 A Black Hawk helicopter and electric motorcycle combo was showcased at the Dubai Airshow 2021. (Andrew White)

Special operations forces (SOF) from the United Arab Emirates (UAE) displayed a new concept, designed to extend the reconnaissance capability of units operating on the ground, at the Dubai Airshow 2021.

Aviation Group 18, the UAE Special Operations Command's (SOCOM's) air component, displayed a Sikorsky UH-60M Black Hawk helicopter with external ramps attached to either side of the airframe for the attachment of electric motorbikes. The UH-60M was displayed carrying a pair of Zero electric motorbikes, a solution which is in operational employment by a series of Western SOF units to facilitate clandestine reconnaissance missions over rough terrain.

Speaking to Janes at the event, a defence source associated with Group 18 described how the capability was under consideration by the unit and the wider SOCOM, which continues to trial it. In addition, the source suggested that should the concept be adopted as an operational capability, Zero motorcycles could be replaced with another brand of electric-powered motorbikes. Other options available to SOF in the market include SurRon, although the SOCOM was unavailable to comment on any selection of electric motorbike.

Discussing potential concept of operations (CONOPs) associated with the airborne delivery of electric motorbikes, defence sources suggested to Janes how Black Hawks could insert a pair of SOF operators at a stand-off distance from a target of interest. Motorbikes would then be rapidly detached and deployed to conduct a reconnaissance mission before returning to a pre-designated pick-up point with the aircraft for extraction.

Electric motorbikes are particularly suited for clandestine reconnaissance missions, providing SOF operators with the ability to move rapidly across difficult terrain while making “virtually no noise and emitting no smell”, sources highlighted to Janes.