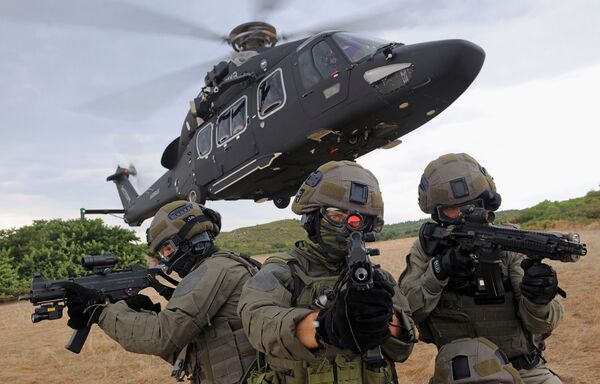 Seen for the first time in a military guise, the H175 is one of a number of platforms expected to bid for the UK's New Medium Helicopter requirement. (Airbus Helicopters)

The primary contenders for the United Kingdom's New Medium Helicopter (NMH) requirement are showcasing their respective offerings at the DSEI 2021 defence exhibition, taking place in London from 14 to 17 September.

Three of the four companies that have so far declared an intent to bid for the UK's Puma HC2 replacement programme are displaying representative examples of the helicopters they plan to propose once the UK Ministry of Defence (MoD) formally releases its requirements.

Airbus is displaying new imagery and a scale model H175M on its stand in lieu of the helicopter the company says it will develop and build in the UK, while Leonardo is showing a full-scale AW149, and Lockheed Martin has a UH-60M Black Hawk that has been flown into the event.

For the NMH requirement, the MoD is looking to replace the Westland-Aerospatiale SA 330E Puma HC2, as well as the Bell 212, Bell 412, and Airbus Dauphin with an anticipated 30 to 40 new medium-lift helicopters.

No formal NMH requirement has yet been released by the MoD but with a planned out-of-service date for the Puma HC2 of 2025, it is expected to be revealed in the very near future.

Bell, which has said it will bid its 525 Relentless, UH-1Y and/or V-22 Osprey platforms, is not present at DSEI, while Boeing has said it will wait on any decision to bid its MH-139 Grey Wolf until a US Air Force production decision expected later in the year.