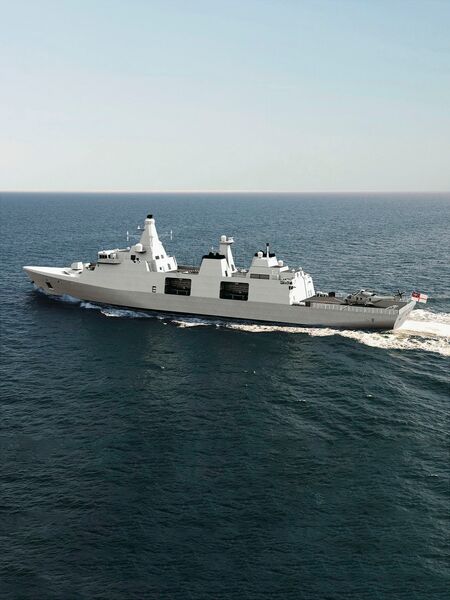 Babcock has outlined to Janes its approach to the four pillars required for Greece's naval procurement programme, for which it is bidding the Arrowhead 140 frigate.

Speaking to Janes at DSEI 2021in London, Babcock vice-president for Marine Business Development Jonathan Walton said that the company had submitted a competitive bid at the end of July that will involve building the vessels in Greece at the Scaramanga and Elefsis shipyards, taking advantage of the modular block-build approach for the vessels. The Arrowyard concept, which was launched at DSEI on 15 September, will be utilised to deliver the build concept to Greece.

Walton also said that the company hoped to leverage its experience on the maintenance, support, and upgrades of MEKO 200 vessels for the Royal Australian Navy (RAN) and Royal New Zealand Navy, as well as its experience in working on the UK Royal Navy's (RN's) Type 23 Duke-class frigates, as part of the second pillar of the Hellenic Navy's requirement.

Walton said that the company had been to Greece to examine the viability of the company's ability to upgrade the Greek MEKO 200 vessels, saying that “we were able to identify each piece of equipment, and look up the routing for removing each piece of equipment, which in this case is not very easy – it's very crowded. We are confident about our ability to perform that work, and we would want to perform as much of it as possible in Greece”.