Sydney-based company DroneShield has been awarded a contract to supply an undisclosed number of RfOne MKII high-frequency (HF) direction finders to the Australian Army to enhance the service's capabilities against unmanned aerial vehicles (UAVs).

The company said in a 19 July statement that the capability is being delivered immediately “to allow the Australian Army to assess its future counter-drone requirements and options”.

“The deployment of these long-range sensors will highlight the flexibility, resilience, and capabilities of DroneShield equipment in a dynamic field environment, while assisting the Australian Army in establishing its counter-drone requirements and future capability options,” said the company statement without providing further details. 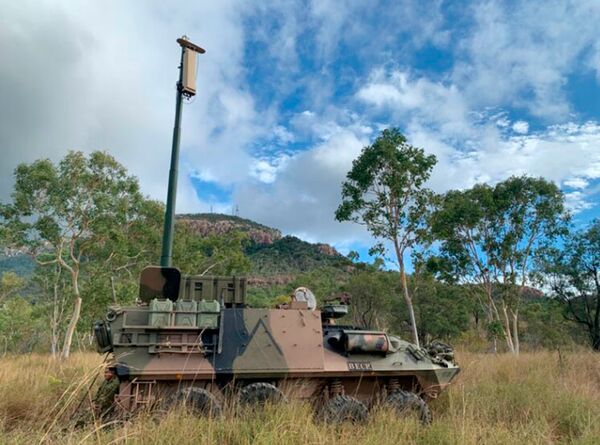 An RfOne MK II long-range sensor fitted onto an Australian Army ASLAV surveillance vehicle. DroneShield announced on 19 July that it has secured a contract to supply an undisclosed number od RfOne MKIIs to the Australian Army. (DroneShield)

The detection system works by setting up multiple RfOne MkII direction finders across a protected area, enabling triangulation to accurately position a UAV operating on ISM frequency bands. This is done by detection of the signals emitted from the UAV's link to its ground station. If the ground station is within the protected area of the direction finders, it could also be detected and triangulated. The RfOne MKII has a maximum range of 8 km, enabling a fairly large area to be covered by a network of these sensors.

DroneShield CEO Oleg Vornik said that the Australian Army acquired a small number of RFOne MKII sensors to deploy them in a range of conditions, adding that idea is that they will use it “on a wider scale down the line” once they are comfortable with the product and its capabilities.

Sydney-based company DroneShield has been awarded a contract to supply an undisclosed number of RfOn...