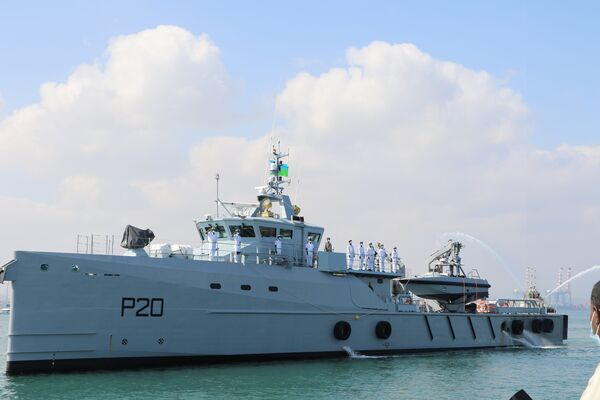 One of the two Damen FCS 5009 patrol vessels that arrived in Djibouti on 22 November. (Forces Armées Djiboutiennes )

The 53 m-long Damens are named Capt Elmi Robleh and Adj Ali M Houmed . Ship tracking data shows they arrived from Cape Town, where Damen has a shipyard, on the day of the ceremony.

They each have two Damen 1102 FRP interceptors that can be launched and recovered using davits and a Rheinmetall Searanger remotely operated weapon station (ROWS) on their foredecks, although their 20 mm guns were not fitted for the ceremony.

Satellite imagery shows that the 66 m landing ship and patrol boat have been docked in Djibouti since April.

The landing ship has a Norinco 30 mm H/PJ17 ROWS, a cargo crane, a small boat that can be launched from davits on its starboard side, and two pintel-mounted heavy machine guns either side of its bridge.

“Two of these ships are intended to carry out surveillance and deterrent missions both in the territorial waters of Djibouti and in the strategic maritime areas, including the strait of Bab al-Mandab,” the president said in his speech.

He described the third as “a ship specialising in transporting mechanised units of the infantry” and said the fourth would monitor Djibouti's territorial waters.