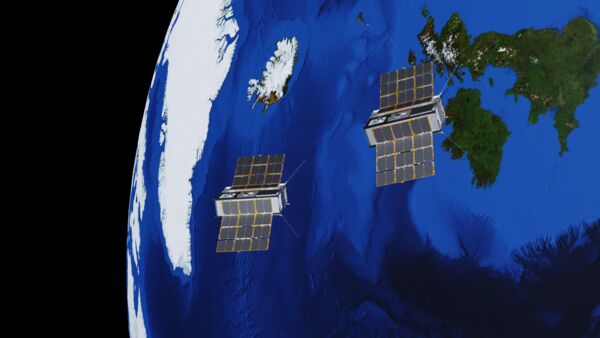 Prometheus 2 ‘shoe-size' satellites – approximately 30 cm in length, 20 cm in width, and 10 cm in height – are scheduled to be launched this summer in Cornwall. (MOD Crown Copyright 2022)

The UK's Prometheus 2 CubeSats will be launched in collaboration with Virgin Orbit this summer.

Speaking at the Defence Space 2022 conference in London, Minister for Defence Procurement Jeremy Quin said that the Prometheus 2 CubeSats will be launched this summer – in partnership with the US National Reconnaissance Office – using Virgin Orbit's launcher solution at Cornwall Spaceport in Newquay.

This would be the first time that the UK has launched a British satellite into space, Quin said.

The Prometheus 2 will be a test platform for monitoring radio signals including Global Positioning System (GPS), conducting sophisticated imaging, and paving the way for a more connected space-based communication system for the UK and its allies, he said.

Underpinned by Defence Science and Technology Laboratory (Dstl) research and development (R&D), developed by Alton-based In-Space Missions, and designed by Airbus Defence and Space, Prometheus 2 will be the first satellites directly owned by Dstl.

The three-year mission is about examination, exploration, and experimentation, with joint mission operations set to be undertaken with Dstl, Airbus Defence and Space, and In-space Missions, Quin said.

Virgin Orbit is a space launch company that launches small satellites in Low Earth Orbit. The company uses an adapted Boeing 747 jet named Cosmic Girl to launch the LauncherOne rocket into space, while at an altitude of 35,000 ft.

The rocket is able to carry payloads of between 300 and 500 kg, Virgin Orbit said.

The UK's Prometheus 2 CubeSats will be launched in collaboration with Virgin Orbit this summer.