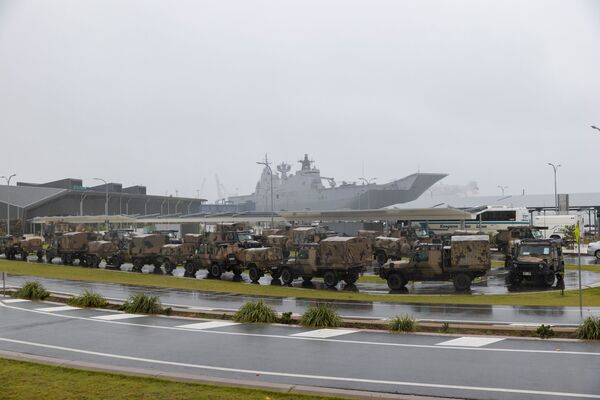 Australian Army's Mercedes-Benz G-Wagon vehicles are parked at the Port of Brisbane, ready to be loaded onto HMAS Adelaide before departure on Operation ‘Tonga Assist 2022'. (Commonwealth of Australia)

Australia, New Zealand, and Japan have ramped up defence-force operations to support Tonga, which was hit by a devastating tsunami caused by the eruption of the Hunga Tonga-Hunga Ha'apai underwater volcano on 15 January.

On 20 and 21 January the three countries deployed equipment including transport aircraft, helicopters, naval vessels, military vehicles, and troops to provide supplies and assistance to the Pacific Island. Aircraft deployments had previously been obstructed by large amounts of volcanic ash and debris on the runway at the Fua'amotu International Airport.

A spokesperson from Australia's Department of Defence (DoD) said that the Royal Australian Navy's (RAN's) Canberra-class landing helicopter dock (LHD) ship HMAS Adelaide was deployed to Tonga from Brisbane on 21 January, and will arrive at the island, which is about 3,300 km away, by “the middle of next week”.

Adelaide is carrying Australian Defence Force (ADF) engineering and logistics equipment, including vehicles, and humanitarian and medical supplies. ADF engineers and specialist sustainment personnel are also on board, the spokesperson said.

Australia, New Zealand, and Japan have ramped up defence-force operations to support Tonga, which wa...