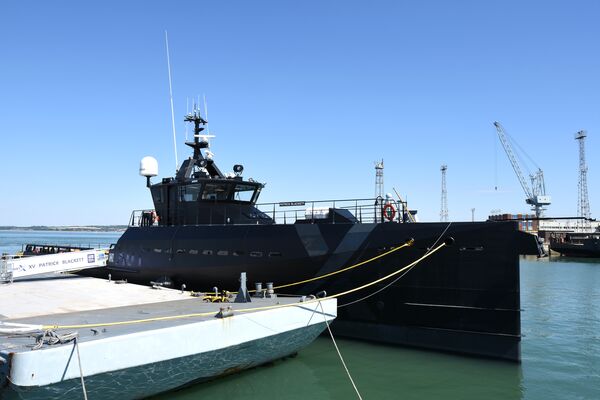 Built by Damen Shipyards at its Gorinchem yard in the Netherlands, XV Patrick Blackett is a 41.2 m FCS 4008 fast crew supply vessel adapted post-build for the trials development role.

The vessel was procured off-the-shelf in February 2022 under a GBP9.3 million (USD11.2 million) contract, which also includes a three-year support package; accepted off contract at the end of March, the vessel was role-modified by Damen before arriving in Portsmouth Naval Base on 27 July. The ship was formally named in a ceremony on 29 July.

The FCS 4008 is a standard Damen design powered by four Caterpillar C32 Acert diesels for a speed more than 20 kt. Important features include an X-bow designed to reduce pitch accelerations, and a 140 m 2 aft working deck provides a large, unobstructed area for the operation of unmanned vehicles or the embarkation of containerised payloads.

Crewed by five RN personnel, XV Patrick Blackett has been flexibly configured to support test and evaluation various vehicles and payloads, including the navy's new Persistently Operationally Deployed Systems (PODS) concept. “The area in 1 Deck, which was previously fitted out with 100 seats, has now been reconfigured to support its experimental role,” said Commander Sam Nightingale, the ship's commanding officer. “So we have an additional four-berth compartment forward, a workshop space, a server room with three 19 inch racks, an office space with five workstations, and a large operations/briefing space.”