A military parade held in Nicosia on 1 October to commemorate the 59th anniversary of Cyprus’ independence has demonstrated that the Cypriot National Guard’s rapid modernisation is ongoing with the acquisition of Serbian-made Nora-B52 155 mm/52-calibre 8x8 self-propelled gun-howitzers and BOV M16 Miloš 4x4 armoured multi-purpose combat vehicles.

A single turret-equipped Miloš followed by four Nora-B52s (which were labelled as ‘Alexander TGS’ systems) were displayed in public for the first time.

Speaking after the parade, Cypriot Defence Minister Savvas Angelides noted that the Cypriot National Guard is being upgraded and thanked a number of his guests, including his Greek counterpart, Defence Minister Nikos Papagiotopoulos, for Athens’ constant support, as well as Serbian Defence Minister Aleksandar Vulin for his country’s practical co-operation.

While few details of Nicosia’s acquisition of Serbian-made weapons exist, Belgrade-based media have reported that Serbia has sold to Cyprus 24 Nora-B52s and eight Miloš artillery reconnaissance and battery command vehicles to equip four artillery batteries in a deal worth almost EUR50 million (USD54.8 million). According to the reports, the first battery of six Nora-B52s for Cyprus would be completed in August. This was in principle confirmed by photos of four Nora-B52s and two Miloš vehicles painted in Cypriot camouflage that were seen on Serbian roads this summer. 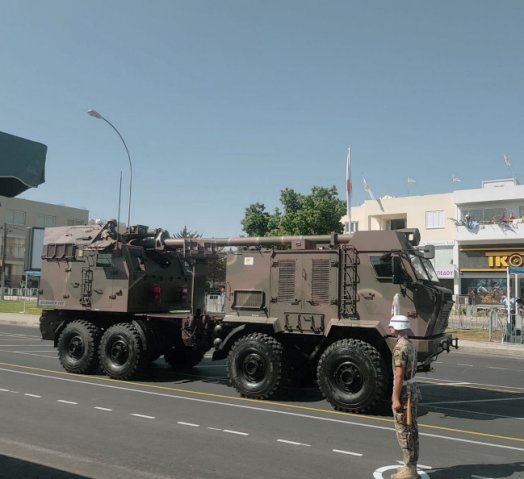 One of the Serbian-made Nora-B52 155 mm/52-calibre 8x8 self-propelled gun-howitzers bought by Cyprus on parade in Nicosia on 1 October. (Serbian MoD)

A military parade held in Nicosia on 1 October to commemorate the 59th anniversary of Cyprus’ indepe...