US Marine Corps (USMC) Commandant General David Berger did not publicly bemoan the prospect of a relatively flat budget over the coming years when he spoke about progress in transforming the force for operations in the Pacific region at an 18 May Brookings Institute event.

“My anticipation was that it was going to be flat [budget] and we were not going to be on a climbing trajectory for the next four or five years,” the four-star general. “I think we are set up okay.”

Over the past year, the USMC has moved ahead with its Force Design 2030 plan that redefines how the service will fight in the future, in part by becoming smaller and more nimble in support of naval expeditionary warfare operations.

“You need a very forward expeditionary, fairly light, fairly mobile force all the time in the right areas,” Gen Berger said, noting that this will allow the service to conduct reconnaissance operations.

”Somebody has to paint a picture of what in the world is going on in front of us and you need a force forward to do that,” he added. “I think satellites and everything else contribute, but there’s great value in being forward.”

Gen Berger said the USMC would act as a “deterrence” to China if based around the Indo-Pacific region.

”Not just deterrence by punishment, or the threat of punishment, but actually deterrence detection, meaning they will have to change their scheme because they believe we can pretty much see what they’re doing all the time,” the commandant added. 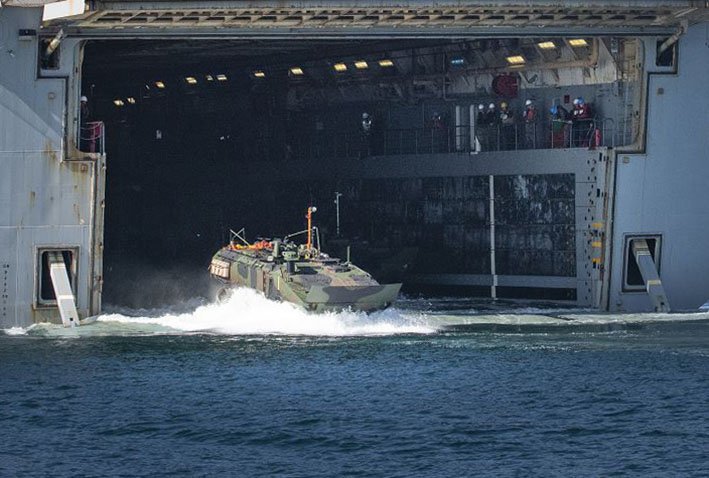 A USMC Amphibious Combat Vehicle (ACV) heads into the water. The service is divesting from legacy systems and funnelling money into newer programmes such as ACV. (BAE Systems)