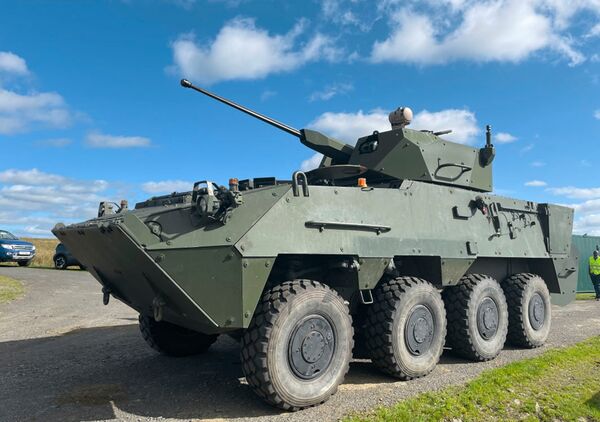 The Cockerill 1030 MCT is a “modular and upgradable MCT” meant to fit varying customer requirements, the company said.

The standard turret structure is of all-welded aluminium armour construction that can be fitted with a tailored applique armour package of up to STANAG 4569 Level 4 ballistic protection.

The baseline turret weighs 1,500 kg, meant to enable integration on a range of platforms, including unmanned ground vehicles. Turret traverse is all electric through 360 degrees with elevation also all electric from -10 to 70 degrees.

It has a crew of two and is armed with a stabilised Northrop Grumman 30×173 mm MK44(S) dual-feed cannon, provided with 150–200 rounds of ready-use ammunition.

A 7.62 mm co-axial machine gun is mounted to the right, and banks of electrically operated smoke grenade launchers can be fitted. Other weapon fits are possible if required by the customer, including a pod of anti-tank guided weapons.

The turret is fitted with a John Cockerill Defense computerised fire-control system that includes a mast-mounted meteorological sensor, coupled to a French SAFRAN stabilised roof-mounted panoramic sighting system with day/thermal channels and an eye-safe laser rangefinder. The gunner also has a stabilised day/thermal sighting system and eye-safe laser rangefinder.