China’s People’s Liberation Army Navy (PLAN) held a launch ceremony for its first helicopter carrier on 25 September at the Hudong-Zhonghua shipyard in Shanghai. 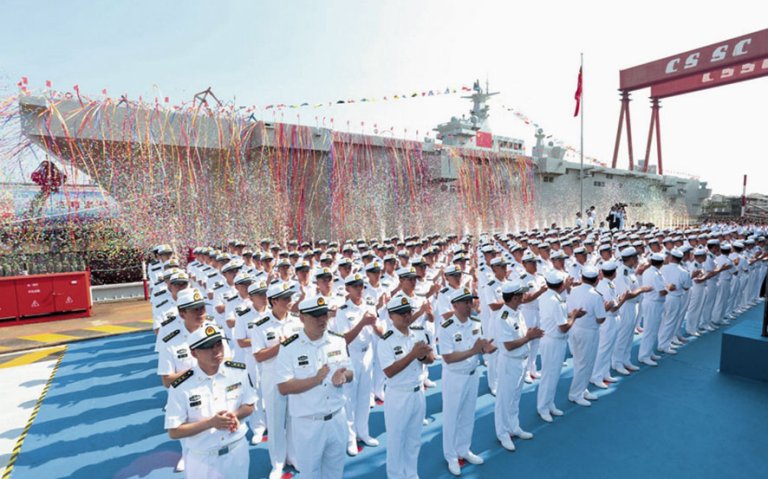 The Chinese navy held a launch ceremony for its first helicopter carrier on 25 September at the Hudong-Zhonghua shipyard in Shanghai. (Via navy.81.cn)

The Type 075-class landing helicopter dock (LHD) amphibious assault ship was floated the same day in the dry dock in which it was built and, according to a warning notice issued by the Shanghai Maritime Safety Administration, was expected to be moved to a berth on the Huangpu River the following day.

Equipment installation, setting to work, and testing are likely to continue for a period of around 12 months before the ship begins sea acceptance trials

The locally designed Type 075 class has a full-length flight deck for helicopter operations and features a floodable well deck from which to disembark hovercraft and armoured amphibious assault vehicles.

The construction of the Type 075 class had been anticipated for several years, with Chinese shipbuilders displaying models of LHDs at various defence exhibitions since 2012. In March 2017 a visit to the Hudong-Zhonghua shipyard by then newly appointed Commander of the People’s Liberation Army Navy (PLAN) Vice Admiral Shen Jinlong triggered reports that construction of the Type 075 had begun, although no confirmation or evidence was forthcoming.

Final assembly of the pre-fabricated modules of the first Type 075 probably started around January 2019 following the launch of the seventh Type 071 (Yuzhao-class) landing platform dock (LPD) vessel, which was built in the same dry dock.

Sweden is modernising its fast attack craft fleet with the Combat Boat 90 Next Generation, which Saa...
Request Consultation