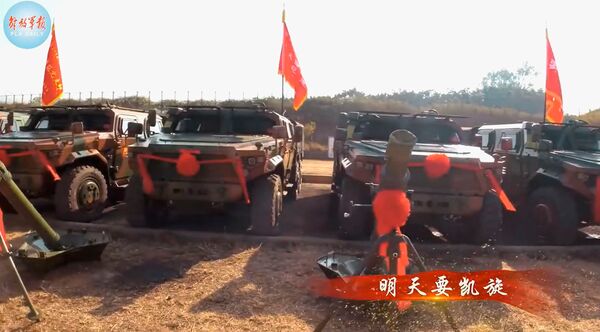 A screengrab from footage released by the PLA Daily on 29 June showing that a mortar-carrying variant of the CTL181A protected vehicle has entered PLAGF service. (PLA Daily)

The footage, which was released via the Weibo social media account of the PLA Daily newspaper, shows at least six such vehicles being inducted into service and then used in training at an undisclosed location.

The images show that each of the modified CTL181As is armed with a 120 mm mortar, which is provided with attachment points on the baseplate that are thought to connect to a small lifting device at the rear of the vehicle to facilitate rapid dismounting and re-mounting of the mortar from the vehicle.

The armament, the lifting device, as well as the ammunition are all mounted on the rear cargo area behind the vehicle's cab during road march.

The mortar appears to be a fairly basic design intended for dismounted operation by the crew, lacking any indicators of automation features such as automatic laying or computerised fire control.

The CTL181A has been used as the baseline platform for several new PLAGF systems, with notable recent examples being a self-propelled howitzer, commonly referred to as the PCL-171, and a new bridging system.