China's new JF-22 hypersonic wind tunnel is expected to be ready for use in 2022, according to a 22 August report by state broadcaster China Central Television (CCTV).

The report confirmed that the wind tunnel has been designed to be capable of simulating conditions for vehicles travelling at speeds of up to Mach 30 at altitudes between 40 km and 100 km. 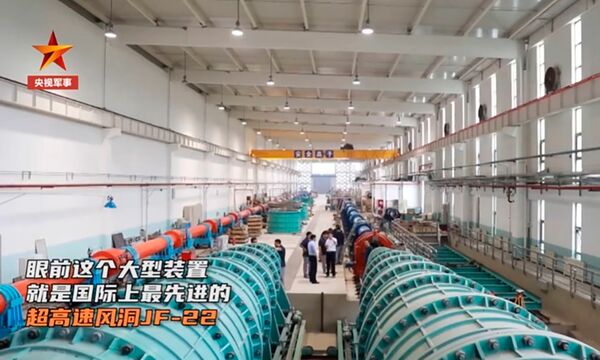 A screengrab from footage released by CCTV on 22 August showing parts of China's new JF-22 hypersonic wind tunnel, which is set to be completed by 2022. (CCTV)

As reported by Janes on 7 June, the facility is under construction at Huairou, on the northern outskirts of Beijing, under the auspices of the Institute of Mechanics of the Chinese Academy of Science (IMCAS).

The capabilities of the JF-22 will extend the test facilities available to the State Key Laboratory of Gas Dynamics, which has operated the JF-12 hypersonic wind tunnel, capable of simulating conditions at speeds up to Mach 9, since 2012.

CCTV said the facility will be used to support the development of both hypersonic aircraft travelling at speeds of between Mach 5 and Mach 10, as well as aerospace vehicles that could be used to deploy satellites.

In a related report published by the Global Times newspaper a Chinese aviation expert was quoted as saying that hypersonic aircraft are likely to be developed before aerospace vehicles as the technological challenges are not as great. He also remarked that early hypersonic aircraft are likely to be used by the military for reconnaissance and attack roles.