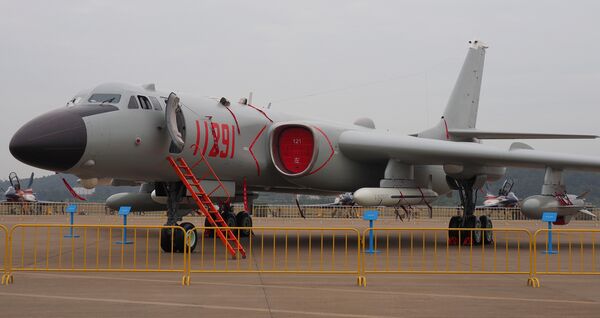 China has flown two H-6K strategic bombers (pictured at Airshow China 2018) in a joint patrol with Russian Tu-95 aircraft over the Sea of Japan and the East China Sea. (Janes/Kelvin Wong)

Chinese and Russian air forces held a joint aerial patrol over the Sea of Japan and the East China Sea on 19 November, the Chinese Ministry of National Defense (MND) has said. The patrol was the third joint Sino-Russian military exercise in 2021, underscoring growing bilateral military ties.

It said the aircraft abided by international protocols and did not enter the airspace of other countries.

Despite this, Japan and South Korea expressed concern about the patrol.

Japan's Foreign Minister Yoshimasa Hayashi said Tokyo had lodged a protest with Beijing and Moscow. “We informed Russia and China via diplomatic channels about our concerns about similar actions from the viewpoint of the regional security,” he said.

South Korea reportedly scrambled F-15 and F-16 fighter aircraft in response to the China–Russia air patrol. South Korea's Joint Chiefs of Staff (JCS) said in media reports that the Chinese and Russian aircraft had been detected off South Korea's eastern coast. The JCS added that it had assessed the patrol as a “joint exercise between China and Russia and [that] additional analysis is needed”.

According to the Chinese MND, the air patrol is further evidence of strengthening Sino-Russian military ties. It said joint military activities are aimed at developing the Sino-Russian partnership, upgrading co-ordination and joint capabilities, and protecting stability.

Chinese and Russian air forces held a joint aerial patrol over the Sea of Japan and the East China S...