An engineering and chemical reconnaissance brigade within the Tibet Military District (MD) of China’s People’s Liberation Army Ground Force (PLAGF) has practised area denial operations through the use of multiple rocket launcher (MRL)-deployed mines, according to video footage released by the district on 14 October via its WeChat account. 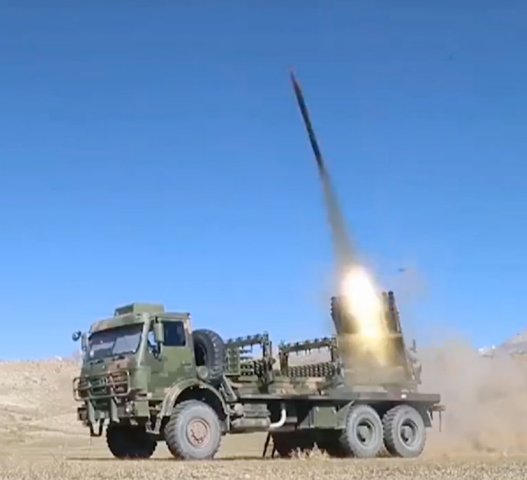 Several examples of the MRL were shown in the footage being used during live-firing exercises carried out on what the Tibet MD said was a plateau at an altitude of more than 4,300 m above sea level. The state-owned Global Times newspaper described the system as the MD’s “latest truck-based multiple rocket-propelled mine launcher”, but an analysis of the images indicates that it appears to be a Type 90A MRL: an analogue of the Soviet BM-21 Grad MRL.

The Type 90A is a 122 mm MRL based on a six-wheeled truck with an extended load tray that allows for a second reload of 40 rockets to be carried.

According to the Tibet MD, the test achieved its goal of remotely setting up obstacles and placing mines across a whole area. It also served to comprehensively examine and improve the troops' capability to set up obstacles with advanced weapons and equipment in an environment where temperatures and oxygen levels are low.

The PLAGF is known to have access to the Type 84 mine-laying rocket, often fired by the tracked Type 89 MRL, which is also operated by the Tibetan MD. The Type 84 122 mm rocket can carry either eight anti-tank mines or 198 anti-personnel mines.

An engineering and chemical reconnaissance brigade within the Tibet Military District (MD) of China’...