Next article
Saudi military fends off surge in Houthi attacks

Some of India’s biggest private sector defence firms have been linked with bids to acquire a controlling stake in BEML Limited, formerly Bharat Earth Movers Limited.

Tata Motors, Mahindra and Mahindra, Bharat Forge, and Ashok Leyland – all producers of military vehicles – are reported to be preparing bids to acquire a 26% stake in the state-owned enterprise, which was put up for sale by the government earlier this year. 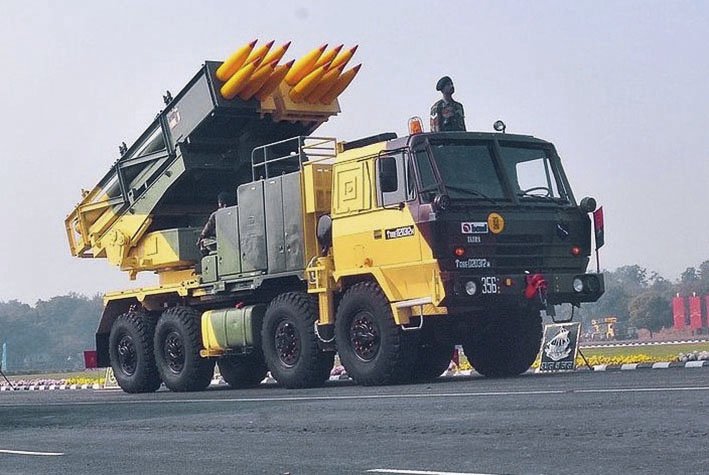 The Indian government is looking to divest a 26% stake in BEML, manufacturer of equipment including high-mobility vehicles for India’s Pinaka MBRL system. (BEML Limited)

The private sector companies have not officially confirmed their interest, although BEML said in a stock exchange filing on 5 March that the company has now appointed a consultant for the share sale.

In January, the government initiated plans to sell its BEML stake through the release of an expression of interest document. The deadline for interested parties was 1 March. The sale of the 26% stake is expected to be worth around USD140 million.

The government’s divestiture will take its ownership in BEML down to 28%. It holds a 54% stake, with most of the remainder owned through Indian stock exchanges.

In its earlier announcement, the government said that the buyer of BEML will be “required to undertake certain obligations” including employee protection, asset stripping, and business continuity. Various other conditions apply to the sale including security clearances and the requirement for investors to have a minimum net worth of USD191 million.

Some of India’s biggest private sector defence firms have been linked with bids to acquire a control...

The Indian government has revealed that it has raised funds worth INR265 billion (USD3.6 billion) ov...

The UK-India Business Council (UKIBC) has called on the government in New Delhi to raise the cap on ...
Request Consultation