Bundeswehr's G36 rifle replacement reportedly delayed, MG4 A3 LMG to be delivered in 2021

Parliamentary approval of the replacement of the Bundeswehr’s G36 assault rifle has been delayed again, the Bild am Sonntag newspaper reported on 7 June. The newspaper quoted a German Ministry of Defence (MoD) spokesperson as saying parliament was to consider the issue in October, as opposed to at the end of June as previously planned. Bild am Sonntag blamed a legal complaint filed by an unnamed arms producer.

An MoD spokesperson confirmed to Janes on 10 June that parliament would consider the G36 replacement this year, while refusing to give further details. “The choice of a replacement system will be reached through a fair process with clear and transparent requirements,” she said. “The Bundeswehr plans to replace the G36 assault rifle with a new weapon. Until the completion of this process, the G36 assault rifle is operational without restrictions.” 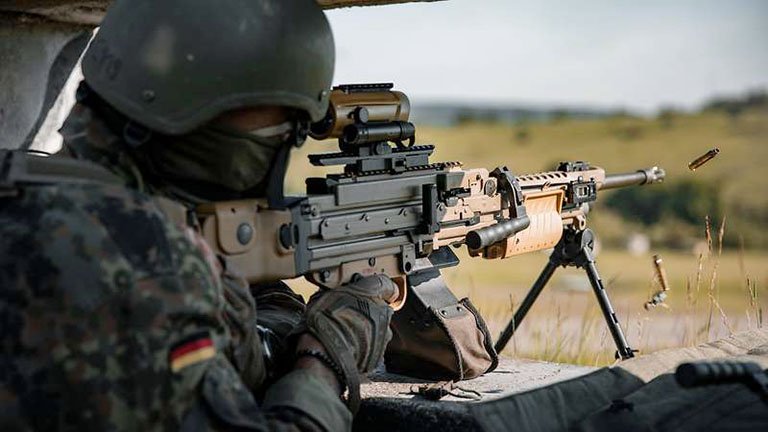 Meanwhile, German paratroopers have tested the MG4 A3 light machine gun (LMG) for three weeks on a shooting range in Baumholder, the German Army reported on its website on 3 June.

The MG4 A3 was tested by soldiers led by Staff Sergeant C Meier, a squad leader in Fallschirmjägerregiment (Parachute Regiment) 26, who was quoted as saying, “The light machine gun fills the gap between the G36 rifle and the MG5 machine gun. In operations we use the MG4 for covering [fire] or as an assault element to combat individual or group targets. A rifleman can use the weapon for various attacks: lying, kneeling or even standing. It is an ideal weapon to react to a suddenly appearing enemy.”

Parliamentary approval of the replacement of the Bundeswehr’s G36 assault rifle has been delayed aga...

An in-house development by Heckler & Koch (H&K) of a new self-loading .22 Rimfire calibre variant of...

The Bundeswehr announced in a press release on 15 September that C G Haenel has been selected to sup...