Brunei Darussalam has recently published its 2021 Defence White Paper, outlining how the small Southeast Asian nation intends to respond to growing strategic threats over the next 15 years.

The policy is Brunei's fourth Defence White Paper since 2004 and its first since 2011. The new iteration – entitled ‘Defending the Nation's Sovereignty' – does not identify a list of military procurement targets but does indicate a series of future capability requirements for the Royal Brunei Armed Forces (RBAF). 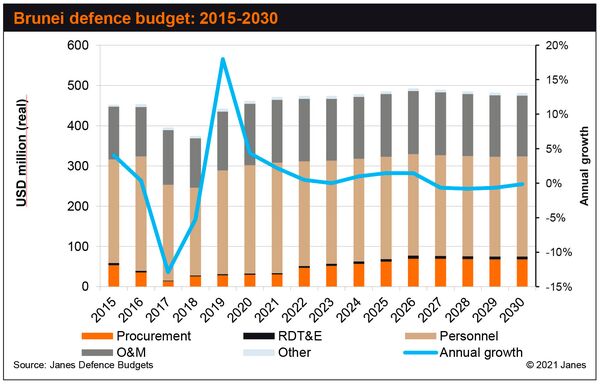 Brunei's defence budget is forecast by Janes to grow only marginally in the next few years. (Janes Defence Budgets)

The White Paper similarly provides no details on defence spending plans, other than outlining a requirement for continued “prudent and optimised use” of military expenditure. Brunei's 2021/22 defence budget, announced in March, is BND610.17 million (USD454 million).

In terms of strategic threats, the White Paper continues most of the themes set out in previous documents including counter-terrorism, territorial disputes in the South China Sea, transnational crime, and climate change. However, the new policy also puts added emphasis on building RBAF capability to respond to cyber and space-related threats and non-conventional risks such as hybrid or grey zone activity.

Responding to the threats, the White Paper outlines a commitment to the country's long-standing three-pillar policy of deterrence; diplomacy; and ‘holistic defence' – the latter term signifying Brunei's whole-of-nation approach to defence and security.