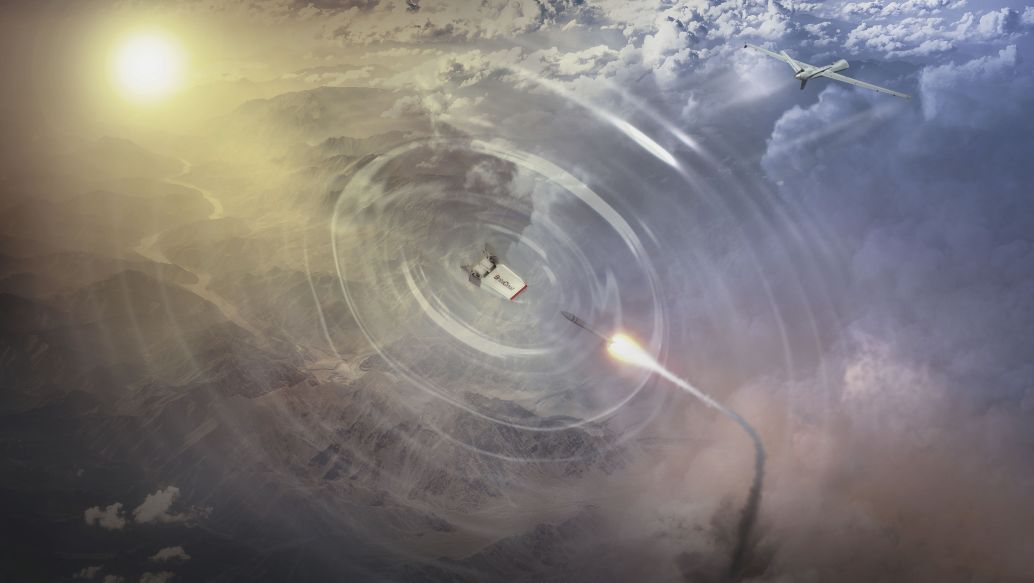 An artist’s impression of the BriteCloud expendable decoy saving an MQ-9 UAV from a surface-launched radar guided missile. (Leonardo)

Announced by the Italian company on 22 February, the tests of the SPP and its UK-designed and built BritCloud EAD took place in late 2020. They were conducted to develop a suite of protections against radar frequency (RF) and infrared (IR) guided surface-to-air missile threats to both the MQ-9A Reaper and MQ-9B Sky/SeaGuardian series UAVs.

“The joint activity [with GA-ASI] is addressing the growing market need to protect the high-value unmanned aircraft from modern, radar-guided threats as they carry out their missions. Progress has already been made, with a number of BriteCloud rounds successfully launched from an MQ-9 in an aircraft survivability ‘carriage and release’ trial, designed to ensure that the decoy can be dispensed safely from the platform’s new Self-Protect Pod,” Leonardo said.

The SPP has been developed as part of a Cooperative Research and Development Agreement (CRADA) with US Special Operations Command (USSOCOM), and with the support of the Air National Guard (ANG), the US Navy (USN), and industry partners BAE Systems, Leonardo, Leonardo DRS, Raytheon Intelligence & Space, and Terma North America. It is based on the Terma AN/ALQ-213 electronic warfare management system, which provides the interface, health, status, and command and control for the various systems installed in the pod. The AN/ALQ-213 functions as the ASE manager that coordinates between the various threat warning and dispensing systems to automatically dispense the appropriate sequencing pattern and expendables to protect the MQ-9.

The US Air Force Research Laboratory (AFRL) could have as many as six Vanguard priority science and ...