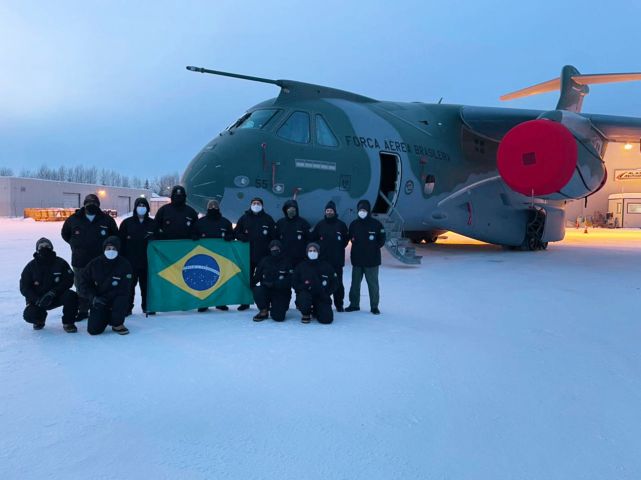 A KC/C-390 airlifter was flown to Fairbanks in Alaska for extreme cold weather trials earlier in February. (Brazilian Air Force)

The Brazilian Air Force (Força Aérea Brasileira: FAB) announced on 12 February that it had despatched one of its recently acquired airlifters to Fairbanks to be exposed to temperatures as low as -37.8°C (-47.8°C including wind chill).

“The Brazilian Air Force and Embraer started the tests of extreme cold (Cold Soak) of the KC-390 Millennium in the United States on 8 February. The mission aims to verify the integration of all subsystems and the robustness of the new FAB freighter in a hostile environment, with extremely low temperature conditions,” the service said.

As noted by the FAB, the test campaign was managed by the Coordinating Committee of the Combat Aircraft Program (COPAC), and includes representatives from the Institute for Promotion and Industrial Coordination (IFI), test engineers from the Flight Research and Testing Institute (IPEV), and members of Embraer. The aircraft operation was supported by the crew of the First Troop Transport Group (1st GTT) ‘Zeus’ Squadron.

“Unlike an environmental qualification regarding the component, the Cold Soak test aims to investigate, in terms of the system, the effect of exposing the aircraft to extremely low temperatures, for a considerable time on the ground, a situation in which the systems failure may lead to service difficulty events, in which the aircraft is unable to operate,” the FAB said.

After the requested exposure time, operational checks of the aircraft were conducted to verify the correct functionality of several systems, such as avionics, electric, hydraulic, flight controls, fuel, engines, auxiliary power unit (APU), and radar.