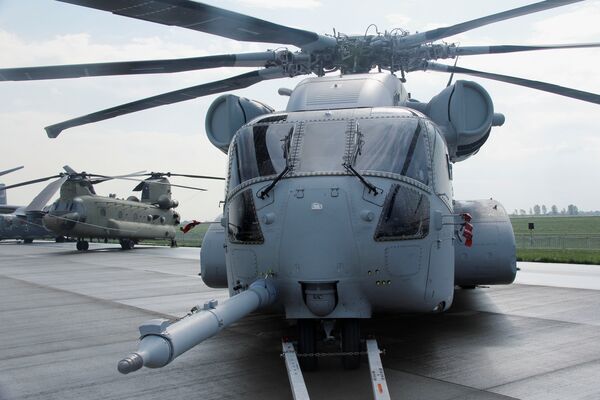 The King Stallion (foreground) and Chinook (background) appeared together at the last ILA Berlin Airshow in 2018. Both are competing Germany's STH heavy-lift helicopter requirement. (Janes/Gareth Jennings)

Germany's Schwere Transporthubschrauber (STH) heavy lift helicopter programme could proceed once the protest from one of the two bidders is heard on 24 November.

Boeing's vice president for the Defense, Space & Security division in Germany told Janes ahead of the Berlin Security Conference that as soon as the protest from rival bidder Lockheed Martin over the German government's decision to cancel the programme in 2020 is resolved, the effort to replace the Luftwaffe's 70 VFW-Sikorsky CH-53G-series Stallions with between 40 to 60 CH-47 Chinook or CH-53K King Stallion helicopters may be able proceed.

“We are all waiting for the hearing that happens with the protest on 24 November, at the German High Court. Does the High Court make a decision at that point – do they side with one of the parties and then the German government can move on, or are there some additional things the court wants to examine?” Michael Hostetter said. As Hostetter noted, however, while the sitting is due on 24 November the decision might not come immediately, with the programme remaining effectively stalled through to early 2022.