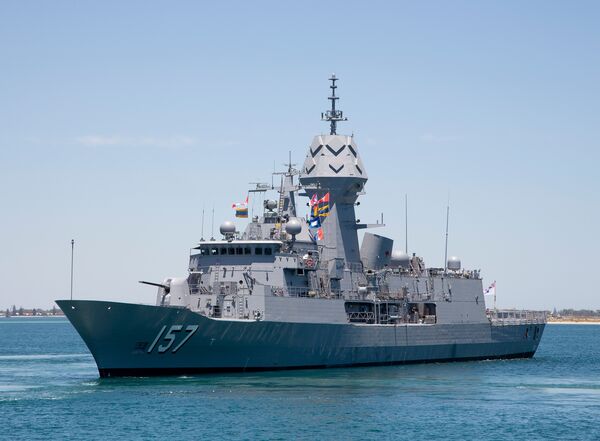 HMAS Perth , seen here on its return to Fleet Base West, Garden Island. (Commonwealth of Australia)

The Royal Australian Navy's (RAN's) Anzac-class frigate HMAS Perth has been redeployed to its home port of HMAS Stirling in Fleet Base West at Garden Island after receiving upgrades under the Anzac Midlife Capability Assurance Program (AMCAP), the service announced on 29 November.

The vessel has been undergoing the upgrades since 2018. As part of AMCAP, Perth was fitted with the Australia-developed CEAFAR2 L-band radar, which provides the vessel with improved air defence capabilities. The sensor has also been incorporated with an improved identification friend-or-foe interrogator system.

AMCAP is the second major project to be undertaken by the consortium known as the Warship Asset Management Agreement. The consortium comprises SAAB Australia, Naval Ship Management, and the Commonwealth of Australia.

The first project, the Anti-Ship Missile Defence upgrade programme, ran between 2010 and 2017, and involved installation of new phased-array radars and other major engineering upgrades across the Anzac-class frigates.

Meanwhile, AMCAP focuses on replacing the frigates' communication systems and air-search sensors. The first ship to undergo AMCAP upgrades was HMAS Arunta and work on the vessel was completed in 2018. Perth is the fourth vessel to undergo AMCAP upgrades. Similar upgrades for all eight vessels in the Anzac class are expected to be completed by 2023.

The Royal Australian Navy's (RAN's) Anzac-class frigate HMAS Perth has been redeployed to its home p...