The ex-Royal Australian Navy (RAN) frigates, Melbourne (FFG 05) and Newcastle (FFG 06), were formally handed over during a ceremony held at HMAS Watson naval base in Sydney on 15 April. 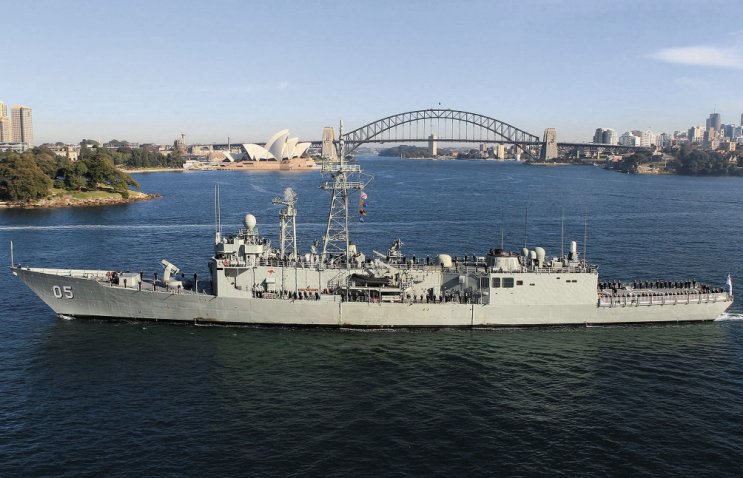 The former HMAS Melbourne – one of two ex-RAN Adelaide-class frigates recently acquired by the Chilean Navy to replace its Latorre class. (Commonwealth of Australia)

The vessels are intended to replace two recently decommissioned ex-Royal Netherlands Navy Latorre (Jacob van Heemskerck)-class air-defence frigates that were built in the 1980s and acquired by Chile in 2004.

Melbourne and Newcastle were built in Australia between 1985 and 1993 under licence from the United States and withdrawn from RAN service in 2019. They are equipped with RGM-84J/L Harpoon Block II missiles, SM-2MR Block IIIA Standard and RIM-162B Evolved Sea Sparrow (ESSM) surface-to-air missiles, an Oto Melara Mk 75 76 mm/62 Compact Gun, the ADACS combat management system, Eurotorp MU90 torpedoes, and a Spherion hull-mounted sonar.

The two frigates, which have been renamed Almirante Latorre (FFG 14) and Capitan Prat (FFG 11), are undergoing a basic refit at Garden Island shipyard, in Sydney. The Phalanx Close-In Weapon System (CIWS) will be removed in Australia, and the Thales Goalkeeper CIWS along with the other standard equipment, will be refitted after the ships arrive in Chile.

Crew training is under way at the RAN’s Training Fleet Support Unit Sydney (FSU-SE) at HMAS Kuttabul and will continue until May. However, due to the ongoing situation of Covid-19 pandemic, the date of final transfer of the vessels to Valparaiso has yet to be confirmed.

The Royal Australian Navy’s (RAN’s) eight Anzac-class frigates are, about 16 to 21 years after commi...

French shipbuilder Naval Group and Canberra have formally agreed that at least 60% of the contract v...

Tense negotiations between Canberra and French shipbuilder Naval Group over future costs and the per...