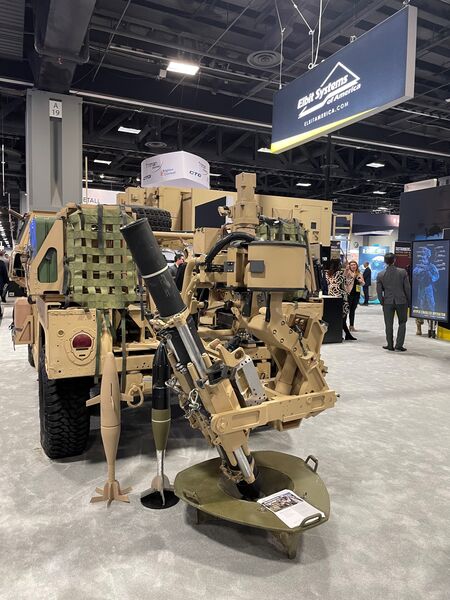 The US Special Operations Command (SOCOM) has purchased one of Elbit Systems of America's Sling mobile mortar systems and is testing the weapon, company officials told Janes on 10 October at the Association of the United States Army (AUSA) 2022 annual symposium in Washington, DC.

The tube and the baseplate are the same as those of the M120 120 mm mortar system, but the weapon is mounted to the rear compartment of a Humvee – or a similar vehicle – and can be stowed there for transport and then folded out and automatically laid on the target via a fire-control system and an electro-drive system that controls azimuth and elevation.

It can be operated by two people, Chris Kennedy, marketing director for Elbit Systems of America, told Janes.

SOCOM has purchased one and received it in May. The command is mulling various options to mount the system besides the Humvee. Kennedy said it was designed for a Humvee's structure, but it could be tweaked to fit other similarly sized platforms.

Sling is designed to maintain vehicle mobility and helicopter internal transport compared with a trailered system, and because it is deployed onto a baseplate on the ground, it does not transfer recoil force to the vehicle.

It is in production and also used by the Israel Defense Forces, Kennedy said.

Sling has a 225° auto-lay with a displacement time under one minute, plus a manual backup, according to the company. It can fire up to 16 mortar bombs per minute and has a sustained rate of 3–4 bombs per minute, Elbit Systems said.

The US Special Operations Command (SOCOM) has purchased one of Elbit Systems of America's Sling mobi...