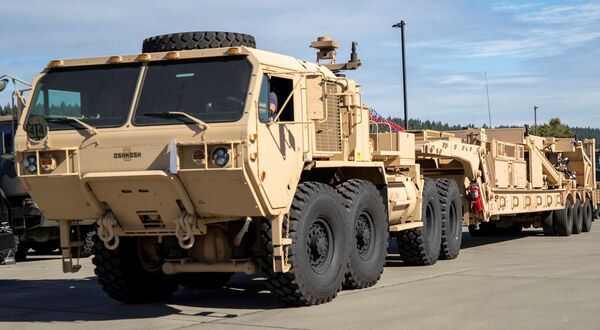 The delivery of the first prototype hypersonic hardware to soldiers of the 5th Battalion, 3rd Field Artillery Regiment, 17th Field Artillery Brigade is completed on October 7, 2021, with a ceremony at Joint Base Lewis-McChord, Washington state. (US Army photo / Spc Karleshia Gater)

A US Army unit has officially received its first Long-Range Hypersonic Weapon (LRHW) launchers and is scheduled to begin ‘new equipment training' on 18 October, according to Lieutenant General Neil Thurgood, the army's director for hypersonics, directed energy, space, and rapid acquisition.

Soldiers are to begin learning “how to set up the launchers, how to set up the tactical operations centre”, and other processes, as well as help create tactics, techniques, and procedures for the new weapon, Lt Gen Thurgood told reporters on 12 October at the Association of the United States Army's (AUSA's) annual conference in Washington, DC.

The first prototype of the army's potential ground equipment for LRHW launch is to be operated by 5th Battalion, 3rd Field Artillery Regiment, 17th Field Artillery Brigade at Joint Base Lewis-McChord in Washington state.

Delivery of the hardware began in March 2021 and finished at the end of September 2021, with official acceptance on 7 October. “The delivery includes a battery operations centre, four transporter erector launchers, and modified trucks and trailers that make up the LRHW ground equipment,” the army said.

“It's a strategic weapon, it's a long-range weapon … controlled at the combatant command level,” Lt Gen Thurgood said, clarifying that it is to be used at a strategic level, but that it does not carry a nuclear payload.

A US Army unit has officially received its first Long-Range Hypersonic Weapon (LRHW) launchers and i...