AUSA 2021: US aims to ramp up hypersonic weapon industrial base, cut unit costs 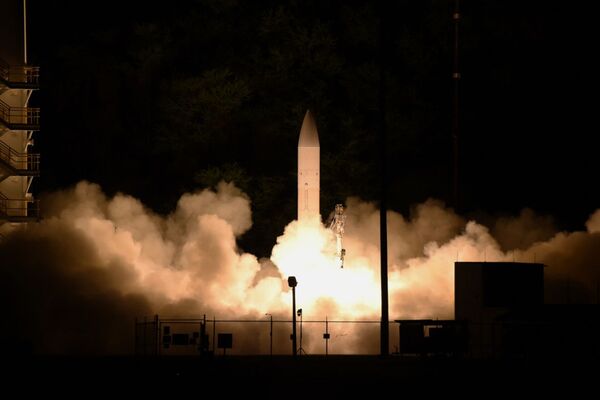 A C-HGB launches from Pacific Missile Range Facility during a Defense Department flight experiment in March 2020. (US Navy/Oscar Sosa)

US contractors are working to productionise hypersonic-speed strike weapons, and rapidly shift them from costly hand-built prototypes into usable equipments that the Pentagon is willing to buy.

Lockheed Martin is a prime contractor for the Navy-Army All Up Round + Canister (AUR+C) for the army's Long-Range Hypersonic Weapon (LRHW) integration, and for the US Navy's Conventional Prompt Strike (CPS) hypersonic project. LRHW and CPS are to use the same booster stack and Common-Hypersonic Glide Body (C-HGB), for which Dynetics is the prime contractor.

LRHW is the US Army's top priority under the Army Hypersonic Project Office, part of the Army Rapid Capabilities and Critical Technologies Office (RCCTO).

Lieutenant General Neil Thurgood, the army's director for hypersonics, directed energy, space, and the RCCTO, declined to give a price per round estimate for the prototyping effort. “We've got to drive the cost down, the cost per kill has to come down,” he told reporters at the Association of the United States Army (AUSA) annual conference in Washington, DC.

Heidi Shyu, undersecretary of defense for research and engineering, also told reporters the same at the event. “We need to figure out how to drive towards more affordable hypersonics,” she said, adding that she wants to help the industry focus on finding “affordable hypersonics materials and processes to drive down costs”.

Shyu predicted that, “as we start to buy more than onesies and twosies [of prototypes], the price curve will come down”.

For LRHW, Lockheed Martin leads via a 2019 contract. Others on the LRHW team include Dynetics, General Atomics, General Dynamics, i3, Moog, Northrop Grumman, Penta Research, Raytheon, and Verity Integrated Systems.

US contractors are working to productionise hypersonic-speed strike weapons, and rapidly shift them ...