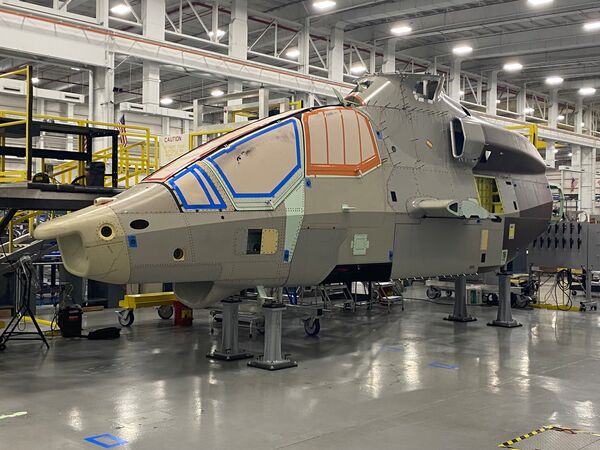 The Bell 360 Invictus, pictured in July 2021. Bell is on track for flying the aircraft in fiscal year or calendar year 2023. (Bell)

Bell is 60% into assembly of its 360 Invictus prototype that it is developing for the US Army's Future Attack Reconnaissance Aircraft – Competitive Prototype (FARA-CP) programme and is on track for flying the aircraft in fiscal year (FY) or calendar year 2023.

Chris Gehler, Bell vice-president and program director for 360 Invictus, told Janes on 7 October, ahead of the Association of the United States Army's (AUSA's) annual convention, that the company has been flying the 360 Invictus in its systems integration laboratory (SIL) since August. Here, Bell flies the aircraft with all of the hardware, cockpit, avionics, and flight control computers, among others, to see how all the systems work together.

Also flying in the SIL are actuation, power systems that replicate the engine model, electronics, and hydraulics. Gehler said the SIL, which is the aircraft without its body, ensures that the first flight not only arrives faster but safely, too. At SIL, the company can perform testing that it would not want to perform in the prototype, such as autorotation, emergency procedures, or challenging flight dynamics, to see how the aircraft would react.

Bell is also making progress on the 360 Invictus' gearbox. Gehler said Bell has completed the buildout on the main rotor gearbox and several other gearboxes, which are being put through the company's drive system test lab. Here, Bell is performing pattern development on the gears to ensure they are aligned while also performing gear tooth bending fatigue testing.

Bell is 60% into assembly of its 360 Invictus prototype that it is developing for the US Army's Futu...