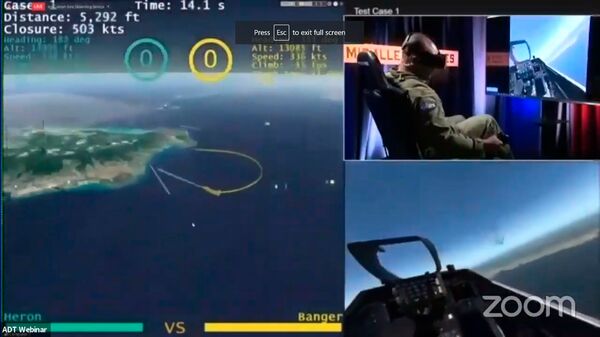 A screenshot of the DARPA AlphaDogfight Trial final round in August 2020 between a Heron Systems AI algorithm and a human pilot using an F-16 simulator. (DARPA)

Shield AI announced on 22 July that it has acquired Heron Systems, bringing together two US software companies that are developing artificial intelligence (AI) pilots for military aviation.

“Together, Shield AI and Heron will accelerate the deployment of advanced AI pilots to legacy and future military aircraft – an urgent and necessary step towards achieving national security priorities and remaining credible in the face of sophisticated peer countries,” the announcement says.

Heron general manager Brett Darcey said that joining a larger company like Shield AI will provide “the opportunity and scale to accelerate the integration of our AI pilot on a next-generation fighter” and unmanned aircraft systems (UASs). Heron was also persuaded by Shield AI's ability to enable UAS to operate without GPS or communications links.

Heron, which has offices in Maryland and Virginia and employs about 40 people, will operate as a wholly owned division of Shield AI, which is based in San Diego, California, and has more than 200 employees.

Shield AI acquired Heron from its founders, who formed the company in 1993. Financial terms of the deal were not disclosed.

Shield AI announced on 22 July that it has acquired Heron Systems, bringing together two US software...

India has signed for 56 Airbus Defence and Space (DS) C295 transport aircraft, with the first to be ...
Request Consultation