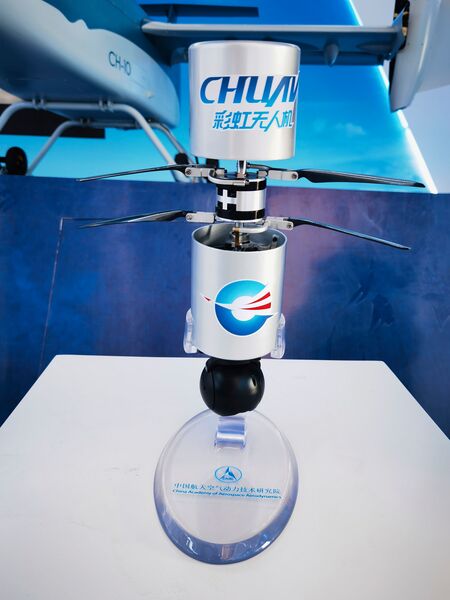 The CH-817 is a micro UAV that can be used to perform tactical surveillance or re-roled with an explosive payload to support anti-personnel operations. (wanquanfoto/CAAA)

Chinese defence prime China Aerospace Science and Technology Corporation (CASC) has unveiled its backpackable Cai Hong-817 (Rainbow-817, or CH-817) micro-UAV at Airshow China 2021, which is being held from 28 September to 3 October in Zhuhai.

Developed by CASC subsidiary China Academy of Aerospace Aerodynamics (CAAA, also known as the 11th Academy) in Beijing, the vertical take-off and landing (VTOL) CH-817 is designed to be a man-portable day and night-operations capable UAV that can be used to boost the effectiveness of ground forces in tactical urban or mountainous environments where situational awareness is often limited.

Manufactured from lightweight alloys and composite materials, the CH-817 features a bisected, cylindrical fuselage module with a pair of mid-mounted coaxial two-bladed rotors, which can fold along the fuselage module's diameter for transport and storage, enabling the UAV to be fitted into a ruggedised canister or backpack. A complete package can comprise a UAV, a handheld operator control unit, and a pair of first person view (FPV) goggles.

The air vehicle weighs 850 g in ready-to-fly configuration and is powered by twin electric motors that drive the two rotor blades, delivering a flight endurance of 15 minutes at a maximum level flight speed of 64.8 km/h.

The CH-817 is typically equipped with an uncooled electro-optical/infrared (EO/IR) turret fitted to the airframe's lower body, which supports a range of flight and surveillance functions including autonomous waypoint-based navigation and obstacle avoidance, as well as target tracking for selected threats. Should lethal effects be desired, the air vehicle can be fitted with a small blast fragmentation payload.