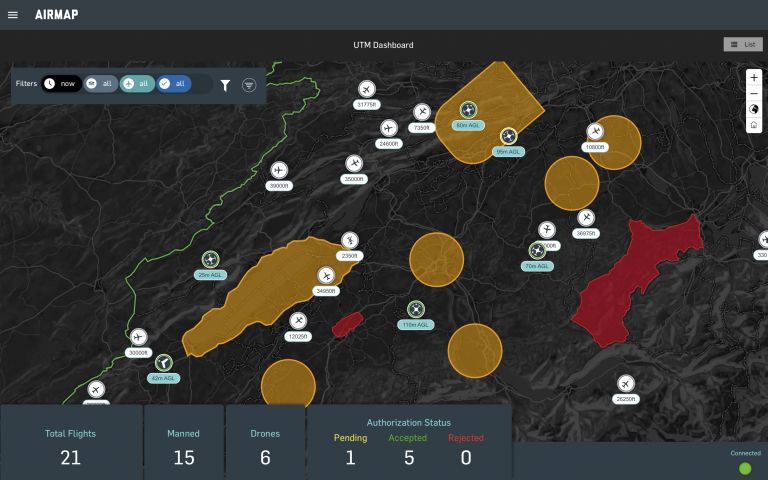 This is a common operational picture including the total number of aircraft within a given airspace using AirMap’s autonomous aircraft digital airspace management system. AirMap is offering this system for the USAF’s Agility Prime eVTOL procurement as an enabling technology. (AirMap)

AirMap allows ATC systems to scale up dramatically. Existing ATC systems, Marcus said, are entirely manual and analogue, relying on people. The existing ATC system in the US, he said, can handle about 45,000 flights per day with roughly 15,000 air traffic controllers operating the system and does not allow for a massive increase in operations scale that the USAF envisions in the future with eVTOL aircraft.

Marcus said, that traditionally, a commercial unmanned aerial vehicle (UAV) pilot who wants to fly within controlled airspace around a US airport must have ATC authorisation to fly. This process also required, in essence, making a paper request to the US Federal Aviation Administration (FAA) at least 90 days before a flight.

Instead of calling air traffic control on the radio as a conventional pilot would, AirMap allows UAV pilots to get their authorisation digitally through its platform using the FAA Low Altitude Authorization and Notification Capability (LAANC) protocol, which allows an operator to digitally receive ATC authorisation automatically in seconds, Marcus said.

AirMap is offering its autonomous aircraft digital airspace management system for the US Air Force’s...

AirMap is offering its autonomous aircraft digital airspace management system for the US Air Force’s...