The milestone was achieved using the Deck Finder local positioning sensor system and the DeckMotion Simulator supplied by Airbus Defence and Space. 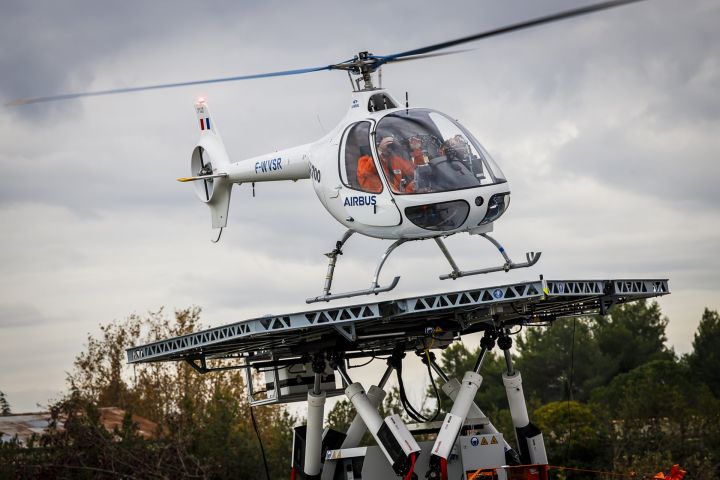 The VSR700 OPV demonstrated its ability to take off and land autonomously on a moving platform. (Airbus Helicopters)

The VSR700 OPV is being developed as a multimission naval UAS under a joint venture between Airbus Helicopters and Hélicoptères Guimbal in response to the French Navy’s Système de Drones Aériens de la Marine (SDAM) requirement announced in 2016.

The effort also involves French naval shipbuilder DCNS, which is responsible for integration of the VSR700 into ship-based operations.

The VSR700 OPV is based on the Cabri G2 light helicopter developed by Hélicoptères Guimbal and incorporates autonomous technologies already tested by Airbus Helicopters. According to company specifications the OPV uses guidance in conjunction with compact ground control station (GCS) options and the GCS can be integrated into the ship’s command management system for deployment from corvettes and larger naval platforms.

The OPV is comparable with the US Navy’s Northrop Grumman MQ-8B Fire Scout, weighing 700 kg and measuring 6.2 m in length and 2.28 m in height. It is powered by a 155 hp Continental CD-155 heavy fuel piston engine.