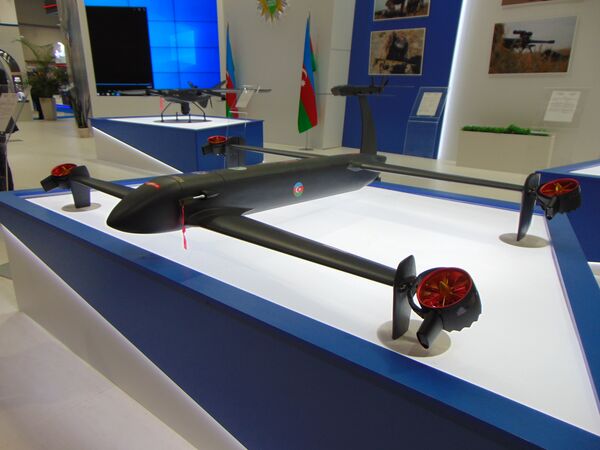 Azerbaijan's DefTech is developing a tiltrotor unmanned aerial vehicle (UAV) and presented a 1:3 scale aircraft at ADEX 2022 in Baku.

Jalal Rahimov, head of the company's technical department, said that the intention is for the platform to fill a logistics role with a key differentiator being its ability to deliver its cargo at speed. Rahimov said that the company expects the final version of the UAV to be capable of 450 km/h and have an endurance of one hour.

Work on the aircraft has been ongoing for around 18 months, Rahimov said, with the scale prototype undertaking flight trials to gather flight performance and control data to help develop its autopilot.

The full-size aircraft will feature two sets of wings, each set with a wingspan of 12 m and fitted with an electric motor that is capable of undertaking thrust vectoring at the wingtips. Rahimov said that the company is looking at motors that are each capable of producing 150 kg of thrust.

The UAV will have a hybrid powerplant, Rahimov said, with a small jet turbine used to generate electricity for the electric motors. DefTech has been exploring different engine types and several units that are used to power small helicopters have been identified.

Rahimov explained that the cargo will be carried internally and loaded via the aircraft's nose as it will be able to open upwards. The high speed of the aircraft will enable it to quickly transit from safe locations in the rear to resupply forward-deployed elements independent of a runway. Rahimov said that DefTech expects the production version of the UAV to be capable of carrying up to 450 kg of payload.