As Airshow China 2021 kicks off,  Kelvin Wong, unmanned systems editor at Janes explores the unique flavour of China’s premier national aerospace and defence exhibition series and previews the some of the new systems that will debut at this year’s event

The 13th iteration of the biennial China International Aviation and Aerospace Exhibition, also known as Airshow China, promises to be yet another brief but valuable window of opportunity to observe China’s growing ability to indigenously develop and field advanced equipment.

This year’s edition runs from 28 September to 3 October, postponed from its original date in November 2020 by Covid-19, and is being staged amid stringent domestic and international travel restrictions, expected to mean there will be fewer foreign visitors and major commercial and military equipment deals announced.

Airshow China is much more than just a commercial and military aviation showcase, with a broad range of combat vehicles, airborne and ground-based electronic warfare systems, radars and missiles on display, as well as a large but still growing selection of air, land and maritime unmanned systems.

With Beijing aspiring to expand its stance on the world stage and the People’s Liberation Army (PLA) rapidly modernising to support President Xi Jinping’s vision of an assertive and revitalised China, this year’s event will be used as a platform to demonstrate that the country is rapidly scaling the technology ladder in its quest to cement itself as a leading regional and global power.

Snippets of what can be expected at Airshow China 2021 have emerged in the weeks leading up to the exhibition via Chinese social media. What is already apparent is the increased variety of equipment that has recently entered service – or is soon to do so – with the PLA’s air and ground forces, such as the electronic warfare version of the locally made, twin-engine Shenyang J-16 multirole combat aircraft designated the J-16D.

Series production of the type continues at Guizhou’s Corporation’s production facility adjacent to Anshun-Huangguoshu airport (subscribers can read this HERE).

Also making its Airshow China debut will be the PLAAF’s WZ-8 high-speed reconnaissance UAV first unveiled during a large-scale military parade on 1 October 2019 in Beijing to mark the 70th anniversary of the founding of the People's Republic of China.

No official information on the WZ-8 UAV has been disclosed to date, but Janes sources indicate that the aircraft is powered by two closed-cycle, liquid-fuelled rocket engines and functions as an air-launched, high-altitude, unmanned reconnaissance aircraft. It can be deployed by the Xian H-6N strategic bomber, which features a modified ventral fuselage section to accommodate the UAV.

The WZ-8 UAV forms an integral part of an innovative and comprehensive early warning sensor network that comprises ground-, maritime-, air-, and space-based surveillance assets. Within that network, the WZ-8 is used to visually confirm satellite detection of strategic targets such as aircraft carriers at stand-off ranges, using its high transit speed to cover long distances quickly and cue land-based ballistic missiles such as the Dongfeng-26 (East Wind-26, or DF-26).

In line with past practice, China Aerospace Science and Technology (CASC) will also be taking the opportunity to announce its latest unmanned aircraft developments, including the new twin-turbofan powered Caihong-6 (Rainbow-6, or CH-6) armed reconnaissance UAV. First revealed by Janes in April 2021, the CH-6 adopts a hitherto unseen airframe design for any Chinese-made platform with a chined fuselage, tapered wings terminating in split winglets, and a T-tail assembly.

Taken together, these developments send clear signals of China’s intent to acquire advanced military technologies that will not just enhance its standing in the immediate region and beyond, but also enable the PLA to achieve President Xi’s vision of a fully networked and modernised force by 2035 and attain “world-class military” status by 2049.

National events such as Airshow China provide a window into this progress and surprisingly rapid real world follow ups.

For example, the twin-engine TB001 UAV prominently exhibited at the 2018 event and in late August 2021, Japan Air Self-Defense Force fighter aircraft encountered exactly that type when they were scrambled to intercept potential incursions into Japanese airspace on two occasions (HERE).

According to Janes forecasts, China’s defence budget will grow by about 65% – from approximately USD258 billion to USD426 billion – between 2021 and 2030.

Up to USD110 billion of this figure will be used for investment funding that will support efforts to restructure its large but unwieldy defence industry, which is still dominated by well-resourced but often inefficient state-owned primes and spur innovation through competition with the private-sector and expanding its access to foreign technology networks.

This imperative will only gain further importance for China in the future, with the US  belatedly but surely ramping up its ability to engage near-peer competitors in the Indo-Pacific region and concurrently working with like-minded partners to stymie what Washington sees as Chinese military expansion. 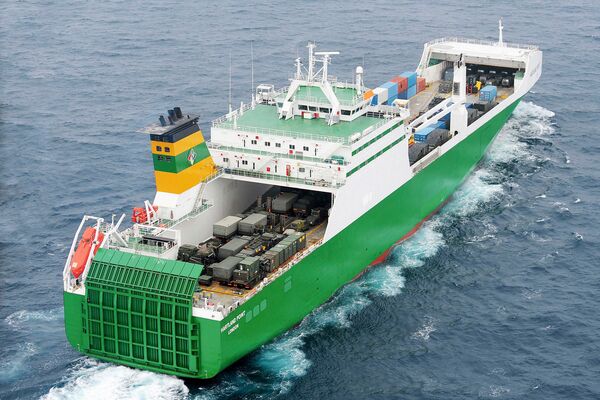 The UK Ministry of Defence (MoD) has begun to explore options for a future strategic sealift capability to begin operation in 2025.

A request for information (RFI) to inform programme and commercial strategies for a planned interim capability, lasting a minimum of five years and to an updated user requirement, was released on 20 October. This interim capability would succeed the MoD's existing sealift contract, which expires at the end of January 2024.

Five European countries have proposed an EU rapid reaction force to give the union the ability to act more robustly and quickly.

Germany, the Netherlands, Portugal, Finland, and Slovenia have drafted a paper proposing that existing EU Battlegroups (EUBGs) be developed into rapidly deployable crisis reaction forces and that the joint decision making on their use be speeded up.

German Defence Minister Annegret Kramp-Karrenbauer and the four other countries presented the initiative to a framework nations seminar in Brussels on 21 October. The evacuation from Kabul in August shows that the EU should be able to act more robustly and quickly, according to the paper.

The five nations proposed that decision making be speeded up by allowing the formation of coalitions of the willing, as stipulated by Article 44 of the EU Treaty. These ad hoc coalitions would be approved by the EU Council to conduct missions or operations.

Kramp-Karrenbauer said EU defence did not require new structures but rather better processes and could be made more robust by longer force standby periods and better training and exercises.