The Zambia Defence Force displayed new vehicles and weapon systems, many of them Israeli made, during the Defence Force Day parade on 13 June. 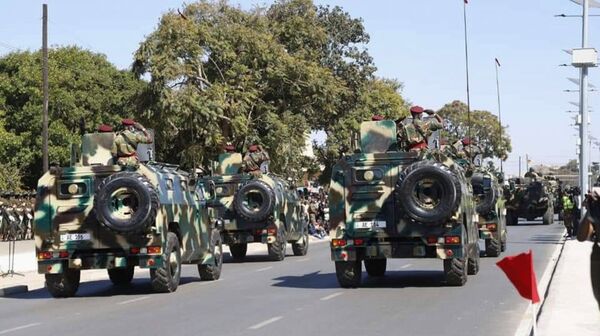 The Zambian howitzers use the 130 mm M-46 gun mounted on a Czech 6×6 Tatra 10-tonne chassis. This is one of a range of ATMOS upgrades Elbit offers for legacy towed artillery, although Zambia appears to be the first known customer for the M-46 variant. The upgrade process typically includes modern navigation, fire control, and command-and-control systems.

The Spear MK2 is a soft recoil mortar fitted with a computerised fire control system paired with an automatic laying and inertial navigation systems for greater accuracy. The Zambian variant appears to be the same as the one adopted by Thailand and uses an Indian Tata Trucks LPTA 713TC 4×4 chassis.

Previously unseen Israeli-made firearms were also seen being carried by the Zambian Army Special Forces Group in the form of IWI Tavor assault rifles fitted with grenade launchers and Galil sniper rifles. The Zambian Army was already known to use Galil ACE rifles.

The Zambia Defence Force displayed new vehicles and weapon systems, many of them Israeli made, durin...