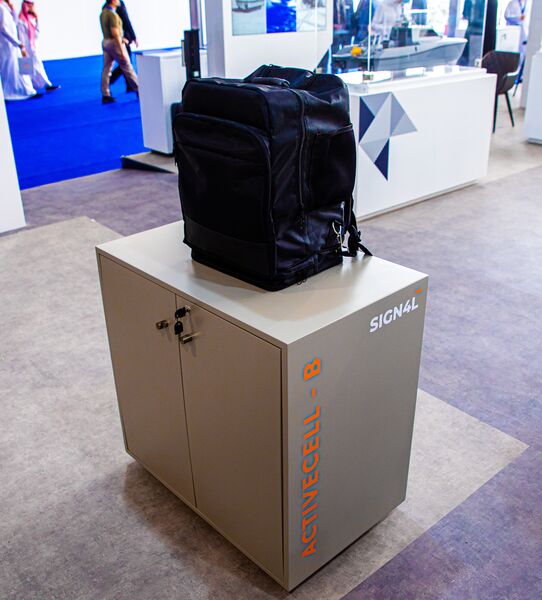 Waleid Al-Mesmari, Edge's vice-president of programme management, electronic warfare, and intelligence, told Janes that both ActiveCell and WiFinder were designed to help end-users manage complex information in a secure manner. “They ensure the maximum levels in protection, situation awareness, and information superiority across increasingly complex operating environments,” he said.

Displayed at the WDS in a backpack configuration, ActiveCell comprises a modular software-defined radio (SDR) that monitors and analyses cellular networks to assist in the detection, monitoring, and location of suspects across 2G, 3G, and 4G networks.

Al-Mesmari said the product allows end-users to conduct “forensic analysis of cellular networks in urban as well as rural environments”. He also suggested the technology could be used during search-and-rescue missions to identify the location of missing persons through their mobile phone signals.

The WiFinder was displayed in a smartphone configuration and is designed to provide security agencies with the ability to covertly monitor communications patterns of behaviour of suspects and high-value targets.

Describing how WiFinder is particularly applicable to the support of counter-terrorism missions, Al-Mesmari explained how the system allowed end-users to track which WiFi networks were used by individual targets at any given time.

“WiFinder emulates WiFi signals, allowing end-users to conduct a link analysis, which enables them to understand who is speaking to who and across which networks through the exploitation of metadata,” he explained.