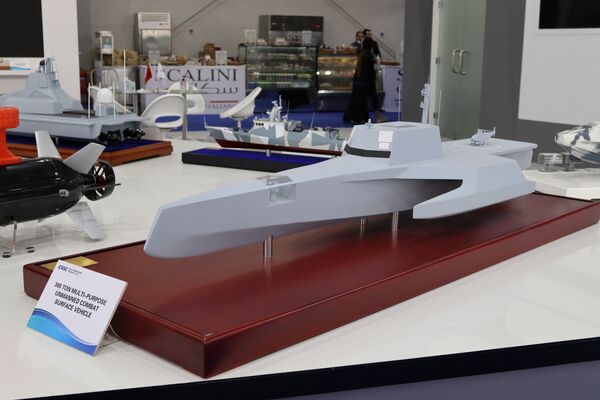 CSSC's new '300-ton' multi-purpose unmanned combat surface vessel, a model of which is pictured above, has a maximum speed of 42 knots and a range of 4,000 nm. (Janes/Charles Forrester)

Technical specifications of the UCSV model displayed at the show, which concluded on 9 March, said the vessel has a length of 58 m, an overall width of 18.1 m, a 6.2 m middle deck, and a displacement of around 340 tons.

The model, which is named by CSSC as a '300-ton multi-purpose UCSV', shows that the vessel is equipped with three waterjet propulsion systems, possibly powered by diesel engines. Technical specifications said the vessel has a maximum speed of 42 knots and a range of 4,000 nm.

Janes assesses from images of the model that the vessel is equipped with a front remote weapon station, possibly fitted with a 20/30 mm cannon in combination with a pair of two missiles. The main bridge accommodates a pair of eight-cell Vertical Launching System (VLS) for surface-to-air missiles (SAMs) mounted amidships.

The model shows that the port and starboard sides of the new UCSV are equipped with a pair of lightweight torpedo launchers, most probably a 324 mm torpedo system such as the Yu-7/ET-52 that is in service with the People's Liberation Army Navy (PLAN).