The British Army’s Warrior Capability Sustainment Programme (WCSP) has completed phase one of its reliability and growth trials (R>s), which means that 50% of the trials process is complete, the WCSP programme director for Lockheed Martin UK (LMUK), Keren Wilkins, told Janes in a 29 July briefing.

To reach this milestone the prototype WCSP infantry fighting vehicles (IFVs) provided by LMUK have completed 59 battlefield missions designed to assess whether or not the vehicles perform according to requirements laid out by the UK’s Ministry of Defence (MoD).

The programme is progressing well despite the Covid-19 pandemic and LMUK is negotiating with the British Army to attain design acceptance ahead of the anticipated contracted date in mid-2021, Wilkins said.

LMUK has already been invited to negotiate a production contract for the turret, which carries the 40 mm Cased Telescoped Armament System (CTAS), and the hull integration kit that will provide the UK’s Warrior fleet with an upgraded and far more modern capability with increased lethality and enhanced protection as well as modern target sights.

Of the WCSP upgrade 80% will be built in the UK, explained Peter Somerville, business development manager at LMUK. The turrets will be manufactured at the LMUK facility in Ampthill, while turret integration will be opened up to a competition, Wilkins added.

Melissa Goodwin, senior programme manager at LMUK, also said that manned firing trials with the WCSP vehicles would be completed before the end of the year. The WCSP upgrade is sending the first vehicle through manned firing trials with a weapon larger than 12.7 mm in calibre since the United Kingdom accepted the Challenger 2 main battle tank (MBT) into service in the early 1990s. 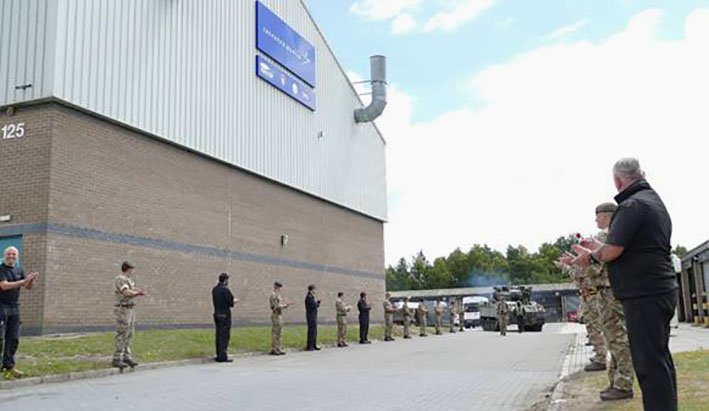 Additional orders for Boxer armoured vehicles have been indicated by the UK defence procurement mini...

UK-based company Cook Defence Systems announced on 27 May that it will provide its TR40 tracks for R...