The Vietnam People's Navy (VPN) received its first-ever submarine search-and-rescue (SAR) ship in a ceremony held on 30 July at the Z189 shipyard in Hải Phòng that was attended by Chief of Naval Forces Rear Admiral Trần Thanh Nghiêm. 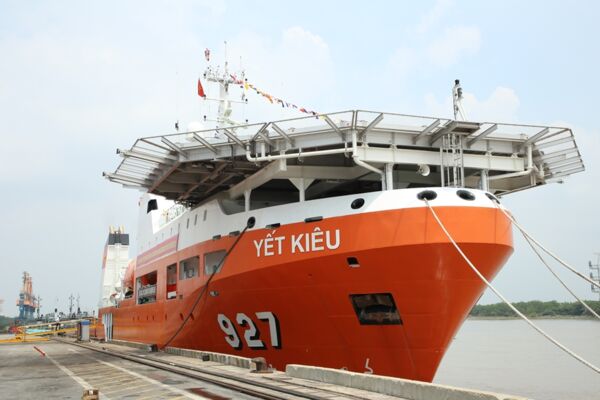 The VPN received submarine rescue ship Yết Kiêu ( 927) from the Z189 shipyard in a ceremony held on 30 July in Hải Phòng. (Z189 Shipyard)

The multipurpose ship, which was launched in December 2019, features a flight deck on the bow and an A-frame aft for the launch and recovery of the LR11 submarine rescue vehicle (SRV). Built by UK-based Forum Energy Technologies, the LR11 is capable of operating at depths of up to 600 m and can rescue up to 17 people at a time.

Forum Energy Technologies supplied the LR11 to Submarine Manufacturing & Products (SMP), which had secured a contract in 2018 to provide a complete submarine rescue equipment solution for the new Vietnamese ship.