AVIC stated that the trial took place at the dual-use Daocheng Yading Airport, which is understood to be the world’s highest airport and located at 4,411 m (14,472 ft) above sea level in the Ganzi Tibetan Autonomous Prefecture, southwestern Sichuan Province. 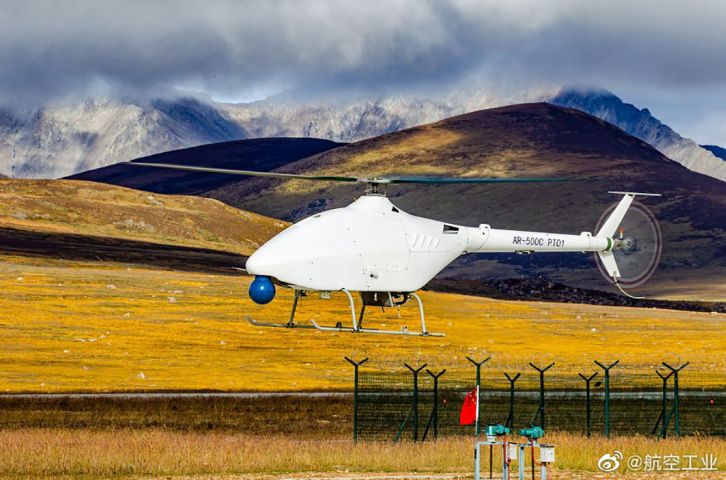 The company added that the AR500C prototype – which is marked with the serial number of AV500C-PT01 on its tailboom – launched at 0900 hours local time and performed a stable hover 10 m above the ground and landed after 15 minutes of flight. It claimed that the trial validated projections that the air vehicle would be able to offer up to five hours of endurance while carrying an 80 kg payload.

The AR500C – also identified as the AV500C – is being developed by AVIC’s China Helicopter Research and Development Institute (CHRDI) and is a derivative of the AV500B VTOL UAV that has been specifically designed for high-altitude operations. The prototype completed a 20-minute maiden flight at AVIC’s dedicated UAV research and development (R&D) facility in Poyang county, northeastern Jiangxi Province, in May.

While the company has yet to release detailed specifications of the AR500/AV500C, the baseline AV500 platform features a maximum take-off weight (MTOW) of 500 kg with an overall length of 7.2 m – inclusive of a 5.7 m-long fuselage and tail section – as well as a height and rotor diameter of 2.4 m and 6.3 m, respectively.

A hitherto unseen image of what appears to be a new indigenously developed, medium/high-altitude lon...