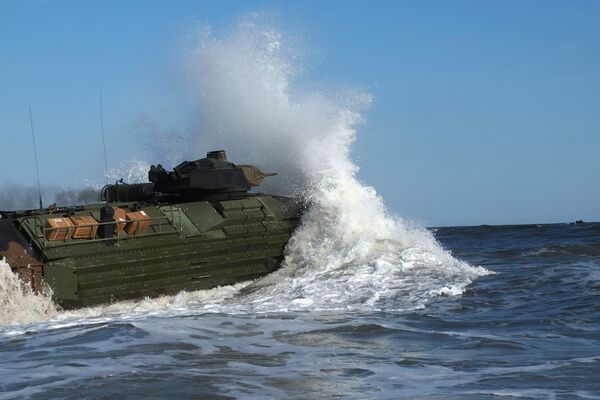 An AAV7 amphibious assault vehicle with the 24th Marine Expeditionary Unit enters the water at Camp Lejeune on 3 October 2018 to embark on USS New York (LPD 21) in preparation for Exercise ‘Trident Juncture 2018'. The USMC is planning to divest from the legacy platform in the coming years. (USMC)

The US Marine Corps (USMC) is poised to retire its family of assault amphibious vehicles (AAVs) in the coming years, with tentative plans to sell legacy platforms to foreign nations. As it plots the vehicle divestment roadmap it is now gauging industry interest in sustaining these vehicles sold under Foreign Military Sales (FMS) deals.

In late October, the service issued a sources-sought notice seeking vendors able to provide AAV parts and components and those also interested in being the lead systems integrator (LSI) for the FMS customers who acquire these vehicles designed to move troops from ship to shore.

“With the inception of the Amphibious Combat Vehicle (ACV), [the service] may gradually divest of the AAV capability through fiscal year [FY] 2027,” the USMC wrote. “AAVs from the United States Marine Corps fleet of vehicles may be identified, refurbished, and sold to FMS customers.

The US Marine Corps (USMC) is poised to retire its family of assault amphibious vehicles (AAVs) in t...