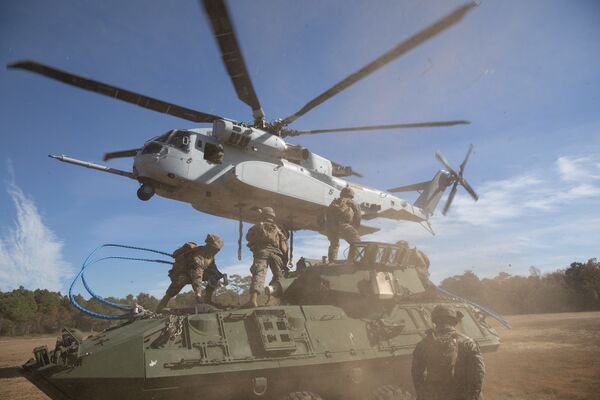 US Marines prepare to attach a light armoured vehicle (below) to a CH-53K at Camp Lejeune, North Carolina, on 19 November. The CH-53K is undergoing IOT&E to develop tactics, techniques, and procedures for its future use. (US Marine Corps)

Marine Operational Test and Evaluation Squadron One (VMX-1) evaluated the CH-53K's ability to meet programme specification for OTH heavy lift capability, according to a corps statement. USMC spokesman Major Jorge Hernandez said on 6 December that the squadron conducted four round trips for troop movement and four round trips carrying a 12,247 kg light armoured vehicle (LAV-25). Each round trip covered up to 220 n miles.

VMX-1 tested the CH-53K's ability to transport the LAV-25 from the Wasp-class amphibious assault ship USS Iwo Jima (LHD 7) to a landing zone ashore. VMX-1 also evaluated the CH-53K's ability to move troops to an OTH location ashore and return to the ship without refuelling. Maj Hernandez said that the troop transport carried 30 troops and a total weight of nearly 4,082 kg, including the troops' equipment, weapons, and ammunition.

The USMC said these tests, which took place in the Atlantic off the coast of Camp Lejeune, North Carolina, were a critical component of the corps' future force operating concepts, such as expeditionary advanced base operations (EABO) and distributed operations. Maj Hernandez said that this event tested the CH-53K's ability to simulate the use of a mobile platform to sustain naval expeditionary forces from an austere location ashore or inshore.