US Marine Corps (USMC) Lockheed Martin F-35B Lightning II combat aircraft have embarked aboard the UK Royal Navy’s HMS Queen Elizabeth aircraft carrier for the first time, ahead of multinational exercises to be held in the North Sea.

Ten aircraft from Marine Fighter Attack Squadron (VMFA) 211 of the 3rd Marine Aircraft Wing (MAW) arrived on the carrier on 22 September, alongside four aircraft from the Royal Air Force’s (RAF’s) 617 Squadron. Both ‘The Wake Island Avengers’ and the ‘Dambusters’, as the US and UK units are respectively known, are to take part in Exercise ‘Joint Warrior’ as well as other training opportunities over the coming weeks. 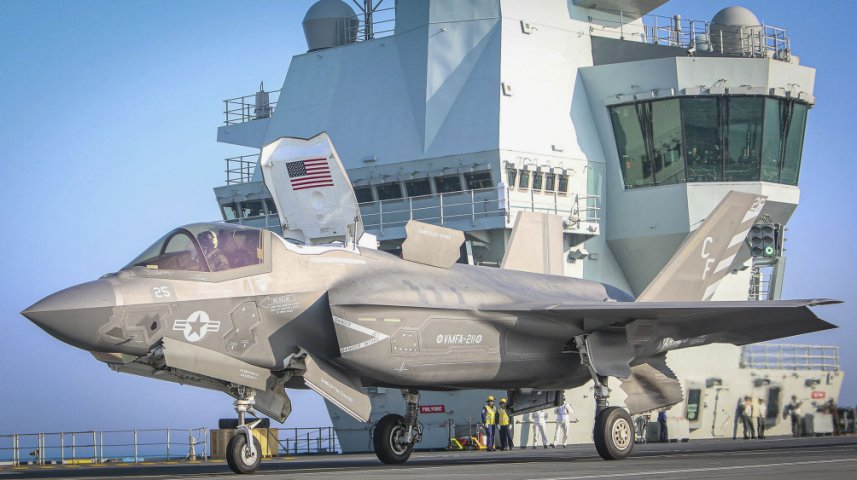 One of 10 US Marine Corps F-35Bs from VMFA-211 that embarked aboard HMS Queen Elizabeth on 22 September. (Crown Copyright)

“With a total of 14 [F-35B] jets and eight [AgustaWestland AW101] Merlin helicopters, it’s the largest concentration of fighter jets to operate at sea from a Royal Navy carrier since HMS Hermes in 1983, and the largest air group of fifth-generation fighters at sea anywhere in the world,” the Royal Navy said.

While USMC F-35Bs have flown on and off HMS Queen Elizabeth previously during integration trials, this is the first time that an operational unit has embarked for exercises.

Prior to this embarkation, VMFA-211 had arrived at the home of the UK Lightning Force at RAF Marham from its homebase of Marine Corps Air Station (MCAS) Yuma, Arizona, on 3 September. VMFA-211 conducted synthetic training in the purpose-built simulators at RAF Marham to familiarise itself with the local airspace and procedures before taking to the Norfolk skies to fly training sorties alongside 617 Sqn in preparation for their embarkation aboard HMS Queen Elizabeth

US Marine Corps (USMC) Lockheed Martin F-35B Lightning II combat aircraft have embarked aboard the U...

US President Joe Biden has nominated former US Air Force official William LaPlante to be undersecret...

The ongoing research and development work at the US Army's newly established software factory could ...
Request Consultation