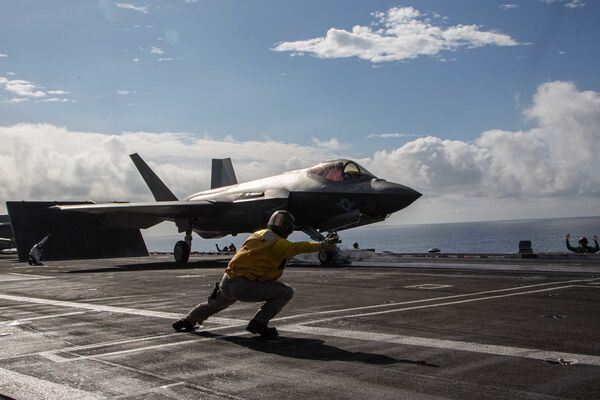 An F-35C assigned to VMFA-314 launches from the flight deck of the aircraft carrier USS Abraham Lincoln (CVN 72). (US Navy)

“Our ability to operate the F-35C in the Pacific greatly increases the [US] Marine Corps' naval expeditionary force capabilities by providing us the capacity to employ the most advanced electronic warfare capabilities on any aircraft today in support of fleet operations,” Lieutenant Colonel Brendan Walsh, VMFA-314 commanding officer, was quoted as saying.

News of the milestone came about seven months after the USMC declared full operating capability (FOC) for the F-35C, with VMFA-314 being cleared to operationally deploy with the 3rd Marine Aircraft Wing (MAW).

The USMC is acquiring a mixed fleet of short take-off and vertical landing (STOVL) F-35B and Carrier Variant (CV) F-35C aircraft. The current plan is for the USMC's current McDonnell Douglas AV-8B Harrier IIs to be replaced by 353 F-35Bs, while its F/A-18 Hornets will be be replaced by 67 F-35Cs. The USMC plans to transition four F-35C squadrons, which will be assigned to US Navy Carrier Air Wings for deployments.