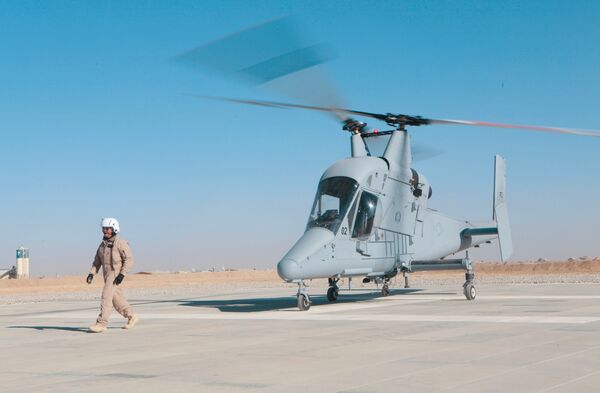 The Kaman K-MAX optionally manned helicopter. The USMC commandant on 14 December alluded to the aircraft, saying the corps would “absolutely” use unmanned vertical lift aircraft to resupply, rearm, and sustain forces as it used the capability to move ammunition, fuel, and water in Afghanistan. (US Marine Corps)

The head of the US Marine Corps (USMC) wants the corps to move faster on acquiring unmanned aerial vehicles (UAVs), including vertical-lift aircraft, as experts say the service does not have a programme of record for acquiring a UAV to do vertical-lift logistics missions.

General David Berger, USMC commandant, said on 14 December that the corps will have a much more balanced vertical lift fleet between manned and unmanned in future. This will be as part of Force Design 2030, a strategy that has the broad aim of having small groups of marines scattered around Western Pacific islands, each with its own organic capabilities.

As the island bases would be small, this would allow the USMC to hide more easily and be more survivable inside China's weapons engagement zone. Gen Berger said the USMC could cover a lot more territory with the same number of people if the corps used UAVs in a smart and tactical way.

Gen Berger said he does not know what the exact balance between unmanned and manned vertical lift platforms will be in the future USMC, but he knows the corps has to move faster.

“We have to push hard into unmanned systems, vertical lift being a part of it,” Gen Berger said during a Center for a New American Security (CNAS) event. “Everything flying is a flying sensor … a flying mover of information and it is hauling stuff and people as well.”

The head of the US Marine Corps (USMC) wants the corps to move faster on acquiring unmanned aerial v...