The US Air Force (USAF) plans to equip its fleet of tanker-transport aircraft with beyond-line-of-sight (BLOS) communications pods so as to serve as command and control (C2) nodes in the future battlespace. 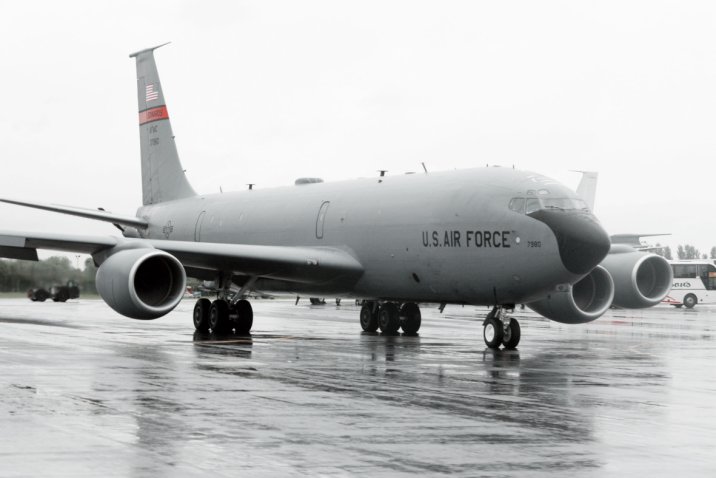 The USAF wants to equip its KC-135R/T (pictured) and KC-46A tanker-transport fleets with a podded BLOS communications system that would turn them into command and control nodes for other assets acting in the future battlespace. (Jane’s/Gareth Jennings)

A request for information (RFI) issued by the service on 3 February calls for industry to provide BLOS communications systems that can be housed in an underwing-mounted pod for carriage by the Boeing KC-135R/T Stratotanker and KC-46A Pegasus platforms.

“The focus of this RFI is on the identification of existing technologies and the near to long-term development potential for the next generation of BLOS communication systems that can be [housed] within a wing-mounted pod on tanker platforms and capable of providing voice, video, and data communications capabilities,” the USAF said. “BLOS communication systems that exist today include tropospheric scatter and high frequency systems as well as various tethered and untethered unmanned aerial vehicles that act as relays. The government is interested in systems that could provide the best redundancy to satellite communications (SATCOM) systems in terms of performance characteristics. The response should address aspects such as operating distance of each technology, reliability, throughput, latency, time of day, and weather dependence.”

The RFI did not disclose a timeline for possible fielding of such a system, and neither did it say how many BLOS pods the USAF would be looking to acquire. The USAF currently fields 396 KC-135R/Ts and is in the process of receiving up to 179 KC-46As.

The US Air Force (USAF) plans to equip its fleet of tanker-transport aircraft with beyond-line-of-si...