The US Air Force (USAF) has approved the Boeing KC-46A Pegasus aerial refuelling tanker's centerline drogue system (CDS) to refuel US Navy (USN) and US Marine Corps (USMC) aircraft, according to an expert. 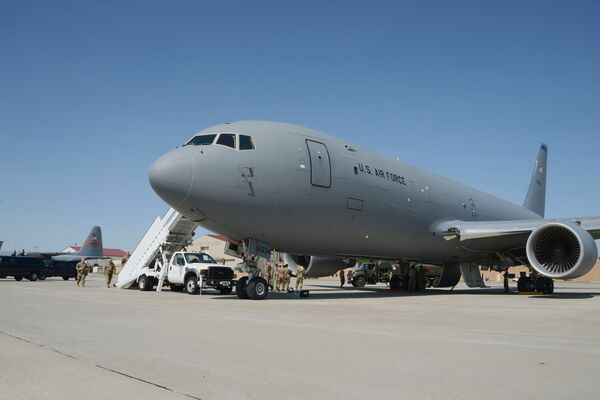 The US Air Force has approved the KC-46A's centerline drogue system to refuel USN and USMC aircraft. (US Air National Guard)

Bryan Clark, senior fellow at the Hudson Institute in Washington, DC, told Janes on 16 July that the CDS is deployed from the back of the KC-46A. The USN, USMC, and some US Army aircraft use the probe-and-drogue method to refuel their aircraft, he added. This is comprised of a long, flexible refuelling hose and a metal basket, similar to a parachute, that provides stability to the basket while in flight.

The pilot of the receiver aircraft then inserts the aircraft's probe into the drogue to begin refuelling. Clark said the probe-and-drogue method puts the receiving pilot in control of the operation. USAF aircraft use a boom, which has not been approved for operational use due to issues with the remote vision system (RVS) and the telescoping actuator, Clark said.

The USAF made the announcement in a 12 July press release, saying that General Jacqueline Van Ovost, Air Mobility Command (AMC) chief, had approved the CDS mission set as the KC-46A's first interim capability release to meet air refuelling requirements. The service said that this decision will provide more daily operational capabilities to the joint team and increase capacity for tanker fleet requirements. The AMC had not responded to a request for comment at the time of writing.

Clark said the KC-46A will eventually have drogue assemblies placed on its wings, allowing it to simultaneously refuel up to three, but usually two, USN or USMC aircraft.