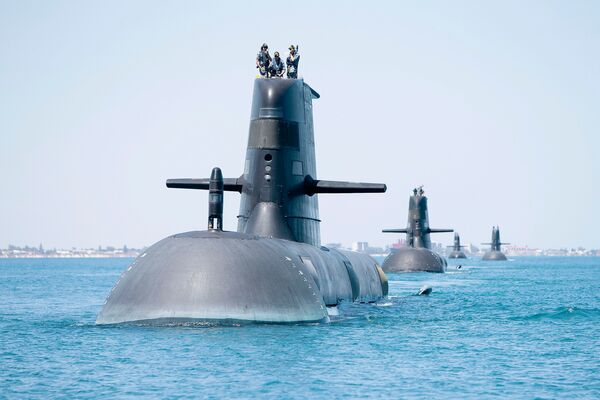 Australia, the United Kingdom, and the United States have started a collaborative effort to develop a nuclear-powered submarine to replace Australian's conventionally powered Collins-class vessels. (Commonwealth of Australia)

Leaders from the United States, United Kingdom, and Australia detailed a new security partnership on 15 September called AUKUS, for which the first initiative will be to collaborate on developing a nuclear-powered submarine fleet.

“Under the ‘AUKUS' alliance, we will enhance the development of joint capabilities and technology sharing, ensuring our people are kept safe from harm and reinforcing our shared goals,” UK officials said in statement. “AUKUS will foster deeper integration of security and defence-related science, technology, industrial bases and supply chains.”

The submarine development project will start with an 18-month consultation period to assess every aspect of the effort for the Australian-built vessels, which, the leaders stressed, will be outfitted with non-nuclear weaponry.

“We intend to build these submarines in Adelaide, Australia, in close cooperation with the United Kingdom and the United States,” Australian Prime Minister Scott Morrison said during a joint press conference to announce the partnership and the submarine plan.

British Prime Minister Boris Johnson highlighted the project's impact on the UK's workforce, stating that it would create “hundreds of highly skilled jobs across the United Kingdom”. Noting that few navies deployed nuclear submarines, Johnson said the UK, US, and Australia will be “joined even more closely together”.

Speaking at the same press conference, US President Joe Biden said, “This initiative is about making sure each of us has the most modern capability we need to maneuver and defend against rapidly developing threats.” Biden noted that he asked Defense Secretary Lloyd Austin to spearhead the effort, with the assistance of the US Department of Energy and State Department.

Leaders from the United States, United Kingdom, and Australia detailed a new security partnership on...