Next article
Janes collaborates with Airbus on Fortion® Massive Intelligence

The United States has part transferred support of Afghanistan's fleet of MD Helicopters Inc (MDHI) MD 530F Cayuse Warrior light attack and reconnaissance rotorcraft to the United Arab Emirates (UAE), ahead of the planned withdrawal of its forces from the country later in the year. 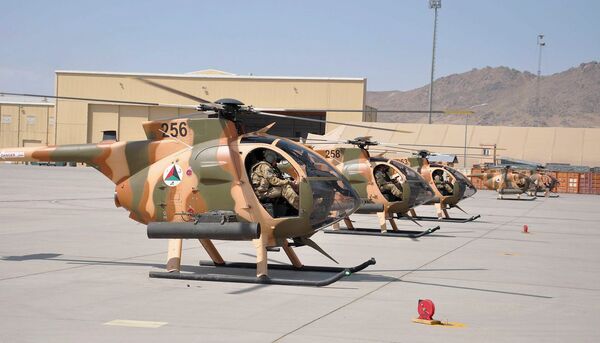 Washington is to transfer to the UAE some of the work needed to support the Afghanistan fleet of MD 530F helicopters. This is part of a wider move to provide ‘over-the-horizon' support to Kabul once US troops leave later in the year. (438th Air Expeditionary Wing)

The last two US Department of Defense (DoD) support contracts for the Afghan Air Force (AAF) MD 530F fleet, the most recent of which was posted on 10 June, have listed Al Ain in the UAE as a site alongside Kabul for maintenance and support. The AAF is due to receive 72 helicopters in all, with deliveries currently ongoing.

The recent move to shift MD 530F maintenance out of Afghanistan is part of a wider US plan to provide ‘over-the-horizon' support to the Kabul government after the Western forces leave the country by the end of September.

The MD 530F is one of a number of strike platforms fielded by the AAF. Known as Jengi (Warrior) in the Afghan service, the MD 530F is equipped with the Enhanced-Mission Equipment Package (EMEP) that comprises the option of the FN Herstal 12.7 mm Heavy Machine Gun Pod (HMP) or 70 mm rockets, combined with upgraded communications equipment, fuel systems, and ballistic protection for the crew. Though partly chosen for the AAF due to its relative simplicity and ruggedness, the MD 530F features a modern ‘glass' cockpit that requires specialist contractor support.